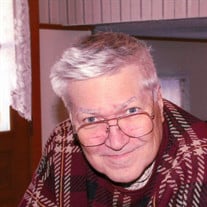 William Lee Stevens (February 19, 1938 – March 26, 2021) beloved son, brother, husband, father, grandfather, and friend, entered this world around 4:30 a.m. weighing a whopping 8 pounds at his home with his parents, Richard and Barbara, and a mid-wife. He left this world around 4:30 p.m. at St. Vincent Hospice surrounded by his loving wife of 56 years, Betty, and two daughters, Tammy and Sonja. When he was just 3 years old, he got up in church and recited “I am just a tiny little fellow. There’s not much I can say. But I know Jesus loves me.” He carried this knowledge and love of God throughout his life. He was baptized at Four Mile Church of the Brethren and held active roles in church as a man. He was always close with family, traveling all over the United States with his grandparents and teasing his little sisters, Judy, Marilyn, and Shirley. He grew up on a farm and loved animals - his favorites were horses and second favorites were cows, which he showed throughout his youth in 4H. He had a witty, quirky sense of humor that all might not have appreciated fully. In school, rumor would have it that he let the air out of all of the bus tires so that he and his friends could run more easily through the bus and jump out the back. He wasn’t really interested in his studies and did not apply himself until college. He attended Tri-State University and obtained an aeronautical electrical engineering degree in just 27 months earning straight A’s so that he could join the United States Air Force to fly planes. A heart murmur prevented him from achieving his goal of flying for the Air Force, but it did not damper his love of flying. He continued his passion for aviation working within the industrial defense complex. His claim to fame there was a tiny important fuse on the Stealth missile. He was known throughout his life to encourage the expansion of knowledge in everyone he met by engaging in questioning and problem-solving from real life issues to riddles. While accomplished in his career, he still managed to design and build an addition on his home virtually by himself, serve and lead in community roles within the church, Lions Club, and Park Board, and attend all of the sporting events that his daughters played in or cheered at. He was a very good father and enjoyed the role. We believe that he led a life with no regrets and was happy and content. He could find enjoyment in the simplest of things, yet he encouraged our everyday dreams, believed we could succeed, and reveled with us in our successes. He was a wonderful grandfather and was deeply loved by his grandchildren. He enjoyed building or instructing on building with Cole, giving advice on money and marriage to Alexa, and sharing a mutual passion for horses with Ava. Due to Covid concerns, his service will be a private family graveside service at the Carpenter Cemetery in McKee, Kentucky, on April 5, 2021. The family enjoys the memories that have been shared with them. Both Bill and his mother suffered from Parkinson’s Disease. The family asks that in lieu of flowers that donations be made to the Michael J. Fox Foundation for Parkinson’s Disease Research: michaeljfox.org. Thank you for caring about Bill and his family. We are very thankful that he passed on his strong foundation in faith. We wish you each love, good health, and no regrets in life. Bill is survived by his wife, Betty Jean Carpenter Stevens, his daughters, Tamatha Ann Stevens and Sonja Renee Blessinger Weigle; his grandchildren, Alexa Morgan Blessinger, Cole Michael Stevens Blessinger, and Ava Grace Stevens; his sisters, Marilyn Jean Elleman and Shirley Louise Rodes; and many nephews, nieces, and in-laws that loved him dearly. He is predeceased in death by his parents, Richard Hart Stevens and Barbara Coddington Stevens; his sister, Judith Anne Horn Elliott; and many other extended family members that he loved dearly.

The family of William Lee Stevens created this Life Tributes page to make it easy to share your memories.

Send flowers to the Stevens family.