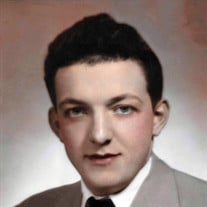 William "Bill" Edward Perry, It is with much love that we mourn the peaceful passing of William “Bill” Edward Perry, of Indianapolis, IN on September 15, 2021, at the age of 85 years. Bill was born on January 21, 1936, in Indianapolis, to William Wilson Perry (1905-1984) and Ruth Flaskamp-Perry (1908-1989). He had one older sister Patricia Perry-Cline (1930-2010). He grew up in Lawrence, on the east side of Indianapolis, and attended Lawrence Central High School, where he played basketball and met his sweetheart Carole Dobbins-Perry (1936-2006). They married soon after when they were both 18 years old on June 6, 1954, at the Oaklandon Universalist Church. During their 52-year marriage, they welcomed four children. After Carole passed, Bill later remarried Mary Wagner in 2008, and they continue to live together in Indianapolis until his death. Bill was a huge personality with a boy like sense of humor he never outgrew. He was very social and enjoyed playing Euchre with friends, and singalongs where he could show off his euphonious voice to all who would listen. He was also a man’s man and loved basketball, cars, and demonstrated great pride in their ownership. It was not unusual, over the years, to see Bill outside doing yardwork, building a deck or touching up paint on the outside of his home. Bill and Carole were the glue that brought the family together, especially during the holidays. Their yard was always brightly lit with Christmas lights, and their mantle crowded with all of the stockings of the large family they created together. Every gift was meticulously thought-out and evenly distributed to make sure that everyone equally enjoyed the fruits of their labor. It was magical and will always be engraved in our fondest memories. While we are saddened by our loss of Bill in this world, we take peace in the memories and knowing we have another angle watching over us. His children will remember him as a hardworking and loving father, his grandchildren will remember him as the “Fun Grandpa”. Bill is survived by his wife Mary Wagner-Perry; four children Denise Praul, Desra Simons, Joseph (Jeri) Perry and Dawn (Bill) Priestley; 9 grandchildren and 9 great-grandchildren. The family respectfully requests all guests wear asks during the service.

The family of William "Bill" Edward Perry created this Life Tributes page to make it easy to share your memories.

William &quot;Bill&quot; Edward Perry,
It is with much love that we mourn...

Send flowers to the Perry family.