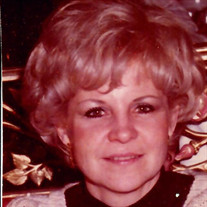 Wanda A. Battas, Wife and mother of two, passed peacefully in her home on January 1, 2021. Wanda was born May 13, 1934 in Muncie, Indiana. She graduated from Muncie Central High School, Class of 1952, and then attended Indiana Business College. She is survived by her husband of 62 years, David A. Battas; and her two boys, David M. (63) and Gregory S. (57) Battas. Wanda was employed and met her husband at the Ski-Hi Drive-in Theatre. She then moved on to bookkeeping at Knapp Supply and NAPA in Muncie. She & David also owned and operated several movie theaters in Indiana including: The Rivoli Theatre, Muncie; The Strand Theatre, Muncie; The Pickwick Theatre, Syracuse; The Sky-Vue Drive-in Theatre, New Castle; and The Castle Theatre, New Castle. Early in her days at the Rivoli, she was dissatisfied with her concession supplier. She then began purchasing her supplies directly from the manufacturers. Soon, many other cinemas wanted to buy their supplies from her as well. This was the beginning of W-G Vending (Wanda & Greg). In 1980, W-G Vending became Indiana Concession Supply, and today is still supplying movie theatres in the Midwest (operated by David M.) The family moved to Indianapolis in 1968, and would commute to other cities to operate movie theatres. Wanda spent a great deal of time painting & renovating the cinemas that the family managed. In her spare time, Wanda had a great love of flowers and landscaping. Her green-thumb was evident on the grounds of their home. She also greatly enjoyed hosting festive holiday gatherings for her beloved family. Wanda was also a concerned caregiver to many friends & family. She was literally a life-line to many. Wanda was the second eldest of seven children. She was preceded in death by her parents, Austin & Lucinda Collins; and siblings, Helen Dickleman, Marvin, Frank & Martha Collins. She is survived by her sister, Bonita Guy; and brother, Ray Collins. There will be a private service for family members only.

Wanda A. Battas, Wife and mother of two, passed peacefully in her home on January 1, 2021. Wanda was born May 13, 1934 in Muncie, Indiana. She graduated from Muncie Central High School, Class of 1952, and then attended Indiana Business College.... View Obituary & Service Information

The family of Wanda A. Battas created this Life Tributes page to make it easy to share your memories.

Wanda A. Battas,
Wife and mother of two, passed peacefully in...

Send flowers to the Battas family.