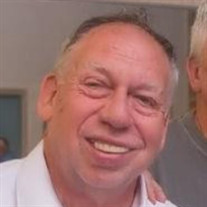 Walter Reid Lessenberry, 71 of Indianapolis, Indiana, passed away January 19, 2022. He was born in Indianapolis to the late Walter, Jr. and Herta Lessenberry. Walter was a graduate of Downers Grove Community High School North. He retired from Advocate Good Samaritan Hospital in Downers Grove, where he had been employed in the Hospital Environmental Services Division for 39 years. Walter was a member of Gloria Dei Lutheran Church for 50 years, where he enjoyed fellowship and sharing his faith with fellow members. Walter enjoyed a variety of interests. His love for travel led him to faraway locations that included the Holy Lands and various locations throughout the United States and Europe. He loved sports and was an avid Chicago Bears and Chicago White Sox fan. In his younger days he was often seen out on the ice all day, playing goalie in the neighborhood hockey games, or tossing a softball in the backyard with his siblings. Music played a large role in his life, and Walter enjoyed listening and collecting all genres of music, with Country and Western and Gospel tunes topping the list. Above all else, Walter cherished the time he spent embracing his faith each day. After reading the Bible, he was always eager to share it with others. A Celebration of Life service will be held in May, 2022 at Adams-Winterfield & Sullivan Funeral Home, 4343 Main Street, Downers Grove, IL 60515, date and time to be determined. Walter is survived by his siblings, Gary (Debbie) Lessenberry, Cynthia Eros and Jeffrey (Glenn) Lessenberry; nieces, Victoria Lessenberry, Melissa Lessenberry and Rebecca (Michael) Parker; and great-nieces and nephew, Sofia, Charles and Annaliah. He is preceded in death by the love of his life, Cathleen Sheffer. Memorial contributions are suggested to Lambs Farm, 14245 West Rockland Road, Libertyville, IL 60048 and/or Ray Graham Associates, 901 Warrenville Road, Lisle, IL 60532.

Walter Reid Lessenberry, 71 of Indianapolis, Indiana, passed away January 19, 2022. He was born in Indianapolis to the late Walter, Jr. and Herta Lessenberry. Walter was a graduate of Downers Grove Community High School North. He retired... View Obituary & Service Information

The family of Walter Reid Lessenberry created this Life Tributes page to make it easy to share your memories.

Send flowers to the Lessenberry family.