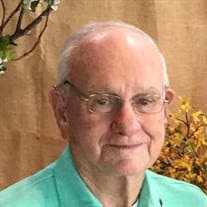 86, of Fishers, passed away November 24, 2021. He was born February 7, 1935 in Prestonsburg, Kentucky to William and Susie (Miller) Shepherd. Tom proudly served his country in the U.S. Army and was a Korean War Veteran. He was Treasurer of... View Obituary & Service Information

The family of Thomas "Tom" James Shepherd created this Life Tributes page to make it easy to share your memories.

Send flowers to the Shepherd family.