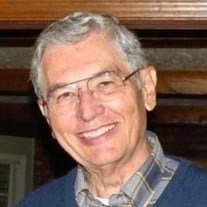 Thomas D. Seeley, Went to the Lord April 10, 2021, after a lengthy illness. He was born November 17, 1934 to Thomas and Genevieve (nee Curry) Seeley in Colorado Springs, CO. Tom graduated from Palmer High School in 1952, and received a B.S. in Political Science from the University of Colorado, Boulder. He served in the U.S. Army on both active duty and in the reserves, reaching the rank of Captain. While attending graduate school at Georgetown University he served in the congressional office of his state representative. After working for GE for three years, in 1962, he joined Dow Chemical Co. in sales and marketing, eventually transferring to Indianapolis as General Sales Manager. Tom and Evelyn Grimm were married in 1963. He was a member of Cornerstone Lutheran Church and loved the church. After retirement from Dow, Tom and Evelyn travelled extensively, which they thoroughly enjoyed. Tom was a Rotarian for almost 40 years and served in several capacities. He volunteered for Executive Service Corps, and became an advisor for non-profits. In addition, he volunteered at the Eiteljorg Museum, and was involved in Indianapolis Zoo activities. Tom enjoyed golf and was a member of Crooked Stick for several years. Tom is survived by his wife of 57 years, Evelyn; sons, Mark and David; grandson, Jordan; brother, Dick (wife Miki) and four cousins: Jennielou Bowen, Linda Hunter, Julie Coryell-Martin and Anne Kelly. Shirley Brothers is handling the arrangements. Visitations will be held at Shirley Brothers Fishers-Castleton Chapel on Thursday from 4:00 p.m. until 7:00 p.m. and at 10:00 a.m. preceding the 11:00 a.m. funeral service at Cornerstone Lutheran Church, 4850 E. Main St., Carmel, of Friday April 16, 2021. In lieu of flowers, memorial contributions may be made to Cornerstone Lutheran Church or the Eiteljorg Museum.

Thomas D. Seeley, Went to the Lord April 10, 2021, after a lengthy illness. He was born November 17, 1934 to Thomas and Genevieve (nee Curry) Seeley in Colorado Springs, CO. Tom graduated from Palmer High School in 1952, and received a B.S.... View Obituary & Service Information

The family of Thomas D. Seeley created this Life Tributes page to make it easy to share your memories.

Send flowers to the Seeley family.