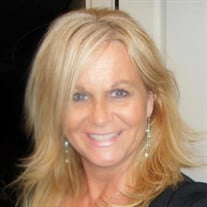 Tami Lee Maslyk, 57, of Carmel, passed away January 20, 2022 at 9:32pm after a long battle with cerebellum atrophy. She was born March 15, 1964 in Owen County, Indiana. Tami was a graduate of Calvary Christian Academy in 1982, Fort Wayne, Indiana.... View Obituary & Service Information

The family of Tami Lee Maslyk created this Life Tributes page to make it easy to share your memories.

Send flowers to the Maslyk family.