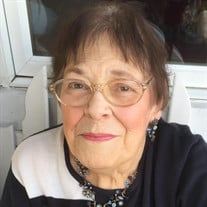 Shirley J. (Hale) Thompson, 85, of Indianapolis, passed away January 4, 2021. She was born June 25, 1935 to the late Charles E. and Hannah M. Huber Hale in Greencastle, Indiana. Shirley married Milton Wells Thompson, Jr., February 20, 1954 and was married for 43 years before his passing on May 19, 1997. She leaves behind her sons, Kenneth M. (Lori) Thompson, Greenfield and Michael E. (Dina) Thompson, Fortville; and a daughter, Melinda A. (Sam) Quarles, Franklin; five grandchildren, Benjamin, Abigail, Matthew, Melissa and Rebecca; and three great-grandchildren, Lilianna, Juniper and Finn; and her nephew, Charles K. Sanders, who was her son in heart. A sister, Betty S. Sanders, preceded her in death. Shirley was best known for her love of crafting. She owned Posies and Pastimes in Greenfield for several years where she taught floral arranging and painting; she loved to bake Christmas cookies, make candies, and always welcomed everyone to her big family Christmas gatherings. She had a fondness for animals, raising Collies early on then changed her liking over to Schnauzers who became her constant companions later in years. In her younger years Shirley also worked for Krannert Cardiology where she served as a medical assistant and EKG technician for Dr. C. Fisch and Dr. Left before leaving to become a full-time homemaker. Shirley was a member of Warren Hills Christian Church and Mt. Comfort United Methodist Church and lived in Greenfield, Indiana up until 2005. In February 2020 she moved to Rosegate Assisted Living. Visitation will be Friday, January 8, 2021 from 12:00 p.m. until the time of service at 2:00 p.m. at Shirley Brothers Washington Memorial Chapel, 9606 East Washington Street. Burial will follow at Washington Park East Cemetery.

The family of Shirley J. (Hale) Thompson created this Life Tributes page to make it easy to share your memories.

Send flowers to the Thompson family.