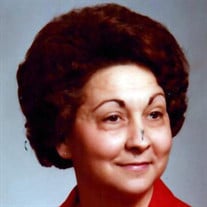 Shirley Ann Backus, 79, of Greenwood, Indiana, passed away February 1, 2021. She was born May 18, 1941 in Shoals, Indiana Shirley graduated from Tech High School Class of 1958. She and her husband, Dennis Allen Backus, shared 36 years of marriage... View Obituary & Service Information

The family of Shirley Ann Backus created this Life Tributes page to make it easy to share your memories.

Send flowers to the Backus family.