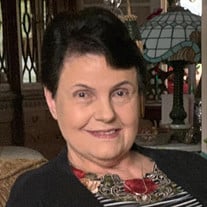 Sharon Lee (Thomas) Raske, 77, of Carmel, passed away January 25, 2021. She was born April 22, 1943 in Grace Hospital, Detroit, Michigan to the late Marion David and Pearl L’eva Thomas. Shari was a 1961 graduate of North Central High School. She received her Bachelor’s Degree in History and English from Olivet Nazarene University in 1965. Shari married Fred Raske, January 2, 1965, in the Broad Ripple Church of the Nazarene, Indianapolis. Following their marriage, Fred and Shari lived in Lansing, Michigan for three years where Shari taught in a Junior High School. In 1969 they moved to Carmel, IN, and Shari was a devoted wife and mother to their two children. Shari was a lifelong member of the Church of the Nazarene and she and Fred had attended the Indianapolis First Church of the Nazarene for the past 40 years. Shari was always an active church member singing in the choir and teaching an adult Sunday school class. Visitation will be Saturday, January 30, 2021 from 10:00 a.m. until the time of service at 12 noon at Indianapolis First Church of the Nazarene, 9401 East 25th Street. Shari is survived by her loving husband of 56 years, Fred Raske; son, John (Angela) Raske of Wheaton, Illinois; daughter, Anne (Todd) Ziegler of Carmel, Indiana; six grandchildren, Mark, Joelle, Katie, Frederick, Isaac and Samantha; and brother, D. Paul Thomas. A brother, Lowell Thomas (Carrine), preceded her in death. Final care and arrangements are entrusted to Shirley Brothers Fishers-Castleton Chapel.

The family of Sharon Lee Raske created this Life Tributes page to make it easy to share your memories.

Send flowers to the Raske family.