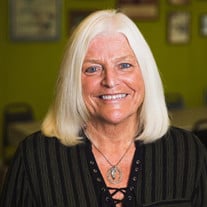 75, of Carmel, Indiana passed away June 24, 2021. She was surrounded by family and loved ones. She was born October 25, 1945 in Grand Haven, Michigan to Harley and Clara (Casey) Bergemen. Sally was preceded in death by her parents, Clara and Harley, and brother, Pat. She is survived by her husband, Hugh Harris; daughters, Kim (Randall) Johnson, Stephanie, Sara (Lucas); son, Casey (Carrie) Harris; and brothers, Tom (Karen) and Donn Bergeman. Sally also leaves behind her amazing grandchildren, Hailey, Emma, Lucy, Sophie, Sam, Maggie and one more on the way. Sally graduated from Grand Haven High School (1963) in Grand Haven, Michigan. She adored her husband of 48 years, Hugh Harris. As well as being the love of her life, she and Hugh co-owned and operated Greek Tony’s Pizza in Carmel, IN. The restaurant opened in 1984. Sally was known as an amazing boss and took pride in employing locally for 37 years. They have deep roots in the community and she is known as the “best boss ever” and a “second Mom” to many. Outside of a beautiful family business, she was most proud of raising her four children and spending time with them. They had many wonderful family vacations, visits and a lifetime of treasured moments. Sally was a true matriarch and enjoyed traveling, board games, bowling and she was an amazing cook! Her meals brought everyone together, whether it was family or friends. When Sally and Hugh retired, they would often spend their winters in Phoenix, where they had a second home. Family came first to Sally and it was a value she instilled in all those around her. Sally’s generosity, kindness and genuine manner will forever be her legacy, along with her beautiful smile. Family and friends are invited to celebrate Sally’s life with a visitation on Wednesday, July 7, 2021 from 2:00 p.m. until the time of service at 5:00 p.m. at Shirley Brothers Fishers-Castleton Chapel, 9900 Allisonville Road, Fishers, IN. In lieu of flowers, please consider a donation of time to be spent with your family, that is what Sally would have wanted the most! Love and laugh often in her memory.

75, of Carmel, Indiana passed away June 24, 2021. She was surrounded by family and loved ones. She was born October 25, 1945 in Grand Haven, Michigan to Harley and Clara (Casey) Bergemen. Sally was preceded in death by her parents, Clara... View Obituary & Service Information

The family of Sally A. Harris created this Life Tributes page to make it easy to share your memories.

Send flowers to the Harris family.