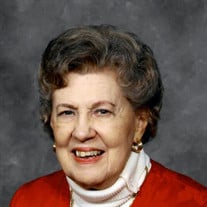 Ruth (Brose) Rogers, 95, of Greenfield, Indiana passed away May 20, 2022. She was born September 20, 1926 in Chatfield, Ohio to Michael and Nora (Robinson) Brose. Ruth married Leroy Rogers, April 14, 1954. They were divorced in 1962. She is survived by her daughter, The Rev. T. Abigail Murphy; son-in-law, Roy Murphy; and granddaughter, Katriel Murphy. Also surviving are sister, Esther Powers of Cuyahoga Falls, Ohio; brother-in-law, Robert Van Horn of Hartford City, Indiana; and nine nieces and nephews. Mrs. Rogers was preceded in death by her parents; brother, Paul Brose; three sisters, Elizabeth Van Horn, Mary Brose and Martha Brelje; brothers-in-law, Gordon Powers and Dr. Terry Brelje; and a niece, Deborah Antrim who passed in 2018. Mrs. Rogers graduated from Chatfield High School, received a Bachelor of Arts degree from Taylor University, and a Master of Social Work degree from Indiana University. She was a member of the National Association of Social Workers, the American Association of Marriage and Family Therapist, and the National Association of Christians in Social Work. She was a licensed social worker. In 1972, she was named Social Worker of the Year by the central Indiana chapter of NASW. Mrs. Rogers was on public welfare staffs in Marion, IN, Indianapolis, IN, and Kenansville, NC. She joined the Social Work Department of Larue Carter Hospital in 1958, and became Director of the department in 1964, remaining there for 32 years. She taught evening courses of undergraduate and graduate social work at Marion College and Indiana University School of Social Work. In 1990, Mrs. Rogers retired from Carter Hospital, and became Director of Suburban East Pastoral Counseling Center remaining there for 14 years. Mrs. Rogers was an active member of Faith United Methodist Church. She served on the Administrative Board, chair of the Missions Committee, and held offices in the Dora Circle. In the past she was a Sunday school teacher of young adults. Visitation will be Tuesday, May 24, 2022 from 4:00 p.m. until 8:00 p.m. at Shirley Brothers Washington Memorial Chapel, 9606 E. Washington Street. Funeral services will be Wednesday, May 25, 2022 at 11:00 a.m. at Faith United Methodist Church, 9031 E. 16th St., with visitation one hour prior. Memorial contributions may be made to Faith United Methodist Church, 9031 E. 16th St., Indianapolis, IN 46229 and/or the Michael and Nora Brose Education Fund, Chatfield Evangelical Pietist Church, 3535 Chatfield Center Road, Bloomville, OH 44818.

The family of Ruth (Brose) Rogers created this Life Tributes page to make it easy to share your memories.

Ruth (Brose) Rogers,
95, of Greenfield, Indiana passed away May...

Send flowers to the Rogers family.