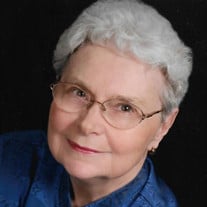 Roberta Ann “Bobbie” Buswell, 82, of Copperas Cove, TX, formerly of Indianapolis, passed away March 4, 2021. She was born January 7, 1939 in Beech Grove, Indiana to the late Thomas Lane and Margaret Ann Worthington. Bobbie married William K. Percifield, and he preceded her in death February 3, 1976. She then married Ralph A. Buswell, and he preceded her in death August 22, 1997. Bobbie was a Marriage License Clerk for Marion County for 15 years. She then became a hostess for Shirley Brothers Mortuaries for many years. Bobbie was a longtime member of Lawrence United Methodist Church, a member of the Copperas Cove Senior Center; and a gifted seamstress. Visitation will be Saturday, June 5, 2021 from 10:00 a.m. until the time of service at 11:00 a.m. at Lawrence United Methodist Church, 5200 Shadeland Ave., Indianapolis, IN 46226. Bobbie is survived by her loving daughters, Mona Ann Hawkins, Terry Lynn Shetler, Karen M. (James) Zweck and Darlene A. (Brian) Kelly; sister-in-law, Grace Worthington; 12 grandchildren; and 27 great-grandchildren. A sister, Joanne Worthington; and two brothers, William and Thomas Worthington, preceded her in death. In lieu of flowers, memorial contributions may be made to Lawrence United Methodist Church, the American Cancer Society and/or the charity of the donor’s choice. Final care and arrangements are entrusted to Shirley Brothers Washington Memorial Chapel.

The family of Roberta Ann "Bobbie" Buswell created this Life Tributes page to make it easy to share your memories.

Send flowers to the Buswell family.