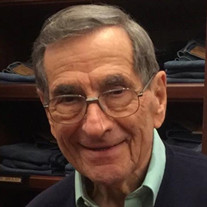 November 18, 1926 – February 3, 2021 Robert “Bob” Uher, 94, was a devoted and loving husband, father, grandfather, and great-grandfather. He peacefully passed away on February 3, 2021. Bob was born in Clamar, Iowa. Calmar was home to his entire family which had migrated there from Czechoslovakia. In high school, Bob was very athletic. Baseball was his favorite sport and he enjoyed playing the position of catcher. He played football and basketball as well. Upon completing high school, he enlisted in the Army to serve in World War II. Bob received a scholarship from the Army Specialized Training Unit which qualified him for college at Rutgers University to study engineering. After two years, he was sent to the Aleutian Islands, serving the U.S. Army in communications for 13 months after training in Fort Hood, Texas. After his honorable discharge in January 1947, Bob completed his electrical engineering degree at Iowa State University under the GI Bill. Bob was recruited by an electrical engineering company in Muncie, Indiana, in June of 1949. In Muncie, he met the love of his life, Jean Clark Uher. They married June 19, 1954 in Wabash, Indiana and celebrated 63 years together. In 1983, Bob and Jean moved to Pineville, Louisiana, where Bob consulted with various power companies, In Louisiana, Bob and Jean discovered one of their greatest passions…the love of Creole food. Bob was a “Foodie” before “Foodie” was a thing! He loved his work,, consulting until 2015 when they moved to the Westmore Senior Living Facility in Fort Worth, Texas. Bob also had many leadership roles in his community of seniors, advocating for residents that he grew to know and love. He was fondly known as “the Mayor of Westmore.” He also loved serving The Walk Church every Sunday morning as the church provided meaningful worship, music, and preaching to Westmore residents. Bob was an unpretentious hard worker, enjoying along the way a good laugh! He was also always eager to share a gourmet meal. Joyful family memories included the celebration of Bob and Jean’s 50th wedding anniversary in Napa, California, and their 60th wedding anniversary in Fort Worth, Texas. He loved sports- and avid White Sox fan, he also enjoyed following golf and football. Bob and Jean relished visits in Santa Monica, Dallas/Fort Worth, and Indianapolis with their daughters and their families, enjoying the blessings of seven grandchildren; and one great-grandson. Bob was preceded in death by his precious wife, Jean, in 2017. He is survived by his three daughters, Dian Garnett of Fort Worth, TX (husband Jim, daughters Samantha (Santa Monica, CA) and Julianne (Fort Worth, TX); Dawn Sites of Indianapolis, IN (husband Terry, children, Thomas (wife Carolyn and son, Isaac, Kittery, Maine), Samuel (Washington, DC) and Madeline (Indianapolis); and Debbe Adamson (husband Peter, children, George and Sydney) of Santa Monica, CA. Please send memorial contributions to: The Walk Church USA, P.O. Box 33552, Fort Worth, TX 76132. Final care and arrangements are entrusted to Shirley Brothers Mortuaries & Crematory. www.shirleybrothers.com.

The family of Robert F. "Bob" Uher created this Life Tributes page to make it easy to share your memories.

Send flowers to the Uher family.