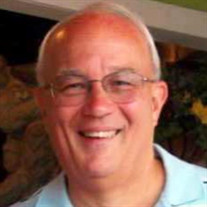 Robert Steven “Steve” Belding, 74, of Indianapolis, passed away May 17, 2021. He was born February 3, 1947 in Indianapolis to the late Robert Vernon and Tommie Frances Belding. Steve was a graduate of Arsenal Tech High School, where he was student body president and a member of the Techoir and the Boy’s Octet. He received his Bachelor’s Degree in Mathematics from Purdue University and attended Butler University while working on his MBA. He married Linda Sue Smith on June 8, 1968, and started teaching math and coaching baseball at Lawrence Central High School. In 1973, he started working for National Insurance Association in Governmental Affairs, retiring in 2000. He then worked for Christian Church Services for the Christian Church (Disciples of Christ) for 11 years. After his second retirement, he volunteered regularly at Indian Lake Country Club in the pro shop. Steve was a former member of Centenary Christian Church, where his grandmother was a founding member. He was a 40-year member of Allisonville Christian Church where he served in many leadership positions. He was a Sunday school teacher, a member of the choir and Arts program, and the church’s unofficial Visitor Greeter. His smile and infectious attitude welcomed many people to the church. Steve was also a longtime Commissioner of Allisonville Pee Wee Baseball League and a reliable server at church events. He went on mission and work trips, played on the church softball team, and was a constant presence on building and planning committees. He enjoyed golf, tennis, and lounge chairs next to a pool, but most importantly he loved being the #1 fan at his grandchildren’s sporting and school events. Steve is survived by his loving wife Linda Belding; daughter Shari Jacobs and son-in-law Ted Jacobs, son Brent Belding and daughter-in-law Amanda Belding; grandchildren, Rachael Jacobs, Kara Jacobs, Griffin Belding, Gray Belding, and Ashby Belding; sister Anita Holder and brother-in-law Roger Holder. He also leaves brothers-in-law, sisters-in-law, and many nieces and nephews. Visitation will be Friday, June 18, 2021 from 4:00 p.m. until 7:00 p.m. and Saturday, from 10:00 a.m. until the time of service at 11:00 a.m. at Allisonville Christian Church, 7701 Allisonville Road, Indianapolis, IN 46250. At Steve’s request, memorial contributions may be made to Allisonville Christian Church Preschool. Final care and arrangements are entrusted to Shirley Brothers Fishers-Castleton Chapel.

Robert Steven &#8220;Steve&#8221; Belding, 74, of Indianapolis, passed away May 17, 2021. He was born February 3, 1947 in Indianapolis to the late Robert Vernon and Tommie Frances Belding. Steve was a graduate of Arsenal Tech High School,... View Obituary & Service Information

The family of Robert Steven "Steve" Belding created this Life Tributes page to make it easy to share your memories.

Send flowers to the Belding family.