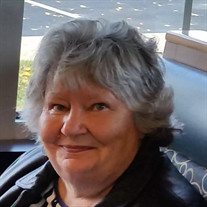 Reeda Throgmorton Slusher, 76, of Carmel, Indiana, went home to Jesus Tuesday, December 8, 2020, due to complications from COVID-19. Born June 20, 1944, in Kansas City, MO, Reeda was the only child of Reed Downing Throgmorton and Cora Elizabeth Hendricks. Little Reeda enjoyed the attention of her many older half-siblings and entertained them with her amusing antics. She once attempted to ride her tricycle down a steep hill while standing on the seat. This earned her the nickname “Dangerous Trick”, the very words she used when explaining what she’d been doing that led to her head-to-toe road rash. Courage and determination proved critical when Reeda lost her father at 18. Soon after, she graduated from Paseo High School and worked her way through college where she met the love of her life, Carter C. Slusher. Once Reeda earned her bachelor’s degree in history from the University of Missouri in Kansas City, she went to work for Mobil Oil while Carter entered the Navy. Carter scrimped and saved to buy an engagement ring. Too excited to wait, he called Reeda with the news of his purchase. Unfortunately, his phone proposal flopped when independent Reeda turned him down. Not to be outdone he sold the ring and purchased a ticket home to KC. After days of cajoling, she finally said yes. They were married December 26th, 1967 at Westport Presbyterian Church amidst a vast array of Christmas decor. Forty one years later, Reeda decided she wanted an engagement ring after all so Carter finally got to give her one! Reeda left the working world behind with the birth of her first child in 1972. The coming years brought two more children, as well as moves to Joplin, MO, Littleton, CO, and Carmel, IN. In each new home, she made lifelong friends as she volunteered her time generously. To name a few: She was a Girl Scout leader, a room parent, and launched Mother’s Day Out preschool programs at both First Presbyterian Church in Joplin and Columbine United Church in Littleton. There wasn’t a child, teen, or stray animal that she didn’t welcome into her home. Her motto “Everybody plays or nobody plays” reflected her passion for inclusiveness and equity. Once her children were independent, Mrs. Reeda began teaching preschool at Trinity Wesleyan Child Care. She enjoyed her time at Trinity, but after 15 years, she left to care for her grandchildren. In addition to working, Reeda was an active member of Orchard Park Presbyterian and enjoyed singing in the choir. She was also a member of the Mission Committee and served as the Interfaith Hospitality Network Coordinator (now called Family Promise of Greater Indianapolis) helping provide temporary shelter and hospitality to displaced families. Reeda also belonged to the Hamilton County Great Banquet community where she served in many capacities. It was through HCGB that Reeda began candidly sharing her own lifelong struggle with mental illness and the strength she drew from her relationship with her Savior Jesus. She was brave, honest, and kind in her effort to help other women deal honestly with their own struggles. Reeda is survived by her husband, Carter C. Slusher of Carmel, Indiana, their three children, Ann Kramer (Jeff), Matthew C. Slusher, and Laura Fitzgerald (Patrick), as well as her precious grandchildren, Sadie, Wilson, Matt, Gideon, and Lydia. She will be desperately missed by all who love her, friends and family alike. A celebration of Reeda’s life and legacy is being tentatively planned for June 20, 2021 (her birthday) Covid permitting. Please let the family know if you are interested in attending by emailing [email protected] and we will be certain to let you know once the plans have been solidified. In the meantime, the family asks that those who wish to express their condolences through material means make a memorial contribution in Reeda’s name to Family Promise of Greater Indianapolis. Contributions can be made online at fpgi.org/donate or by mail: FPGI, 1850 Arsenal Ave, Indianapolis, IN 46218 (noting her name under memo).

The family of Reeda Throgmorton Slusher created this Life Tributes page to make it easy to share your memories.

Send flowers to the Slusher family.