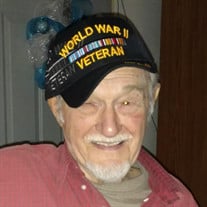 Ray A. Knouff, 96, of Indianapolis, passed away October 3, 2021. He was born March 14, 1925 in Columbus, OH, to the late Ray Carlton and Lucille Knouff. Ray proudly served his country in the U.S. Army during WWII, and married Marjorie E. Diddle,... View Obituary & Service Information

The family of Ray A. Knouff created this Life Tributes page to make it easy to share your memories.

Send flowers to the Knouff family.