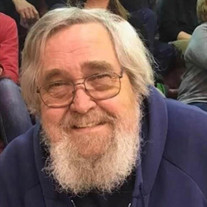 Randall “Randy” W. Harris, 77, of Indianapolis, passed away May 17, 2022. He was born May 5, 1945 in Indianapolis to the late Charles Clayton and Edna Mae Harris. He was preceded in death by his second mother, Cherry Bridge Harris; and his sister, Sue Stonebraker. Randy was a graduate of Southport High School. He proudly served his country with the U.S. Marine Corps in the Vietnam War and was employed with United States Postal Service for 30 years, retiring in 2009. After retirement Randy was employed with O’Reilly Auto Parts. Randy was an avid outdoorsman who enjoyed camping, fishing and grilling for his family. He loved going out to eat at his favorite restaurant, Schneiders Bar & Grill. Randy was the BEST PAPAW EVER, and loved spending time with his grandchildren and family. He enjoyed watching the Indianapolis Colts and NASCAR, and doing crossword puzzles. Randy is survived by his wife, Jerri Harris; children, Sean Harris (Jennifer), Dawn Cummings (Joey), Mikie Holden (Shad) and Tina Robinson (Mitchell); grandchildren, Kayla, Demi, Brendin, Faith, Josh, Allyssa, Asia, Alison, Ava, and Amelia; brothers Ronnie Harris, Michael Harris, and Jeff Harris, and sister, Shirley Cravens. In lieu of flowers, memorial contributions may be made to the Wounded Warrior Project, P.O. Box 758516, Topeka, KS 66675-8516.

The family of Randall "Randy" W. Harris created this Life Tributes page to make it easy to share your memories.

Send flowers to the Harris family.