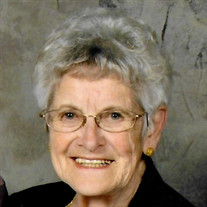 R. Phyllis Edens, 90, of Indianapolis, passed away January 16, 2022. She was born February 19, 1931 near Mintonville, Kentucky to the late Henry Clayton and Ella (Hines) Walker. The family moved to Indiana when she was six years old. Phyllis married E. Wayne Edens on September 2, 1949, and he preceded her in death on May 19, 1997. Their family grew to include three sons, Rocky, Randy and Clayton. Phyllis worked for a time at Colors, Inc. on the east side of Indianapolis, but was eventually able to stay at home, where she helped raise several more children as a babysitter over the years. In 1974, her eternity was changed, when she accepted Jesus as her Savior. She then began her 48-year membership at Lawrence Baptist Church, where she served in the nursery, as a Sunday school teacher, choir member and prayer warrior. The Lord saw her through the passing of her husband. She was also a two-time breast cancer survivor. She became wheelchair bound in 2017 but continued to read her Bible and pray for her children and her church family. Her Savior met her on the 16th, and showed her the Heavenly home He began preparing for her when she became a Christian. She’s now rejoicing with her Lord, and loved ones who preceded her to Heaven. She’s survived by her loving sons, Rocky (wife Alinda), Randy (widower to Debbie) and Clayton (wife Gina); grandchildren, April (husband Lee) McMullen and Ryan Edens; great-grandchildren, Branith and Jordan; and brothers, Tom Walker and Jack Walker; and sister, Pat Hall. Visitation will be Saturday, January 22, 2022 from 11:30 a.m. until the time of service at 1:00 p.m. at Shirley Brothers Washington Memorial Chapel, 9606 East Washington Street, with burial in Holton, Indiana at 3:30 p.m. Memorial contributions may be made to Lawrence Baptist Church, 106 South Post Road, Indianapolis, IN 46219.

R. Phyllis Edens, 90, of Indianapolis, passed away January 16, 2022. She was born February 19, 1931 near Mintonville, Kentucky to the late Henry Clayton and Ella (Hines) Walker. The family moved to Indiana when she was six years old. Phyllis... View Obituary & Service Information

The family of R. Phyllis Edens created this Life Tributes page to make it easy to share your memories.

Send flowers to the Edens family.