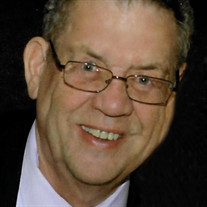 Strength, intelligence, generosity, and patience decreased from the world when Peter Arden Stenehjem passed away February 9, 2022, in Greenfield, Indiana. Born June 16, 1941, in Minot, North Dakota, to Andy and Thelma Stenehjem, Pete was proud of his Norwegian heritage. As a youth he worked on the family farm and played football, baseball, and basketball at Arnegard High School, graduating in 1959. He then attended Concordia College in Moorhead, Minnesota, achieving Bachelor of Arts in Math and Chemistry in 1963. His childhood hobby of building model planes and remote-control aircraft “when [he] could afford the radios” foreshadowed his career in the U. S. Navy. In June 1963 he attended the U. S. Navy Preflight School in Pensacola, Florida, where he was first commissioned. He then completed training to be a Naval Flight Officer and was assigned to Fighter Squadron VF-74. He said that Hollywood made the movie An Officer and a Gentleman about him and also claimed he was the prototype for Goose in Top Gun. He spent two eight-month cruises on the USS Forrestal aircraft carrier before being selected for Naval Postgraduate School in Monterey, California. After four years of active duty, he joined the reserves, working with anti-submarine warfare squadrons at NAS Glenview until retirement in 1984 as a Lieutenant Commander. Navy buddy, Wayne Ward, and a job at Naval Avionics as an electronic engineer brought him to Indiana. Pete’s bachelor years were filled with many stories of traveling the world, hanging out at the PDQ in Arnegard, visiting The Playboy Club, and enjoying fast cars and sports like skiing, but he couldn’t resist Sally Thompson. Pete’s bachelor status changed to that of husband and father on July 11, 1986, when he and Sally were married in Arnegard, North Dakota. Pete then dedicated his life to making her and her teen son, Bill, happy. Bill was blessed to have gained this amazing man as the patient, supportive father he was missing. Son, brother, husband, father, aviator, farmer, friend – Pete valued all these roles but probably none more than being “Papa” to grandsons Pete and Tony. Papa Pete loved being photographer and videographer, leaving the family with documentation of a lifetime of memories of sporting events, Christmases, and the many trips to Disney. Bill and the boys learned a lot about being a good Papa from Pete’s loving example. One of Pete’s favorite times of the year was when he went pheasant hunting with the guys at Milo’s ranch on the Little Missouri in North Dakota. Sickness couldn’t keep Pete down, even when he was diagnosed with liver cancer in 2017. Given a prognosis of two years, Pete defied the doctors and flourished, enjoyed a trip back to North Dakota last summer and loved playing poker with Bill’s buddies. Pete was tough and strong, and you usually couldn’t even tell he was sick. In addition to his parents, Pete was preceded in death by his nephew Levi Wisness and a baby brother, Gregory Stenehjem. Staying behind to cherish the memories of him are his wife Sally; son Bill (Holly) Thompson; grandsons Peter Andrew Thompson and Antonio John Thompson; step-granddaughter Bethany (John) Nguyen; great-grandchildren Bailey and Oliver Nguyen; siblings Glenn Stenehjem and Julie Wisness and their families; cousin Doug (Marcia) VanDyke; extended family; and many, many friends. Many thanks to first responders and Hancock Regional Emergency Department for their care and compassion on February 9. There will be a private family service in the coming weeks. In lieu of flowers or contributions, the family wishes that everyone would hug their loved ones a little more tonight and toast Pete with a Jack on the rocks the next time you have the chance.

The family of Peter "Pete" Arden Stenehjem created this Life Tributes page to make it easy to share your memories.

Send flowers to the Stenehjem family.