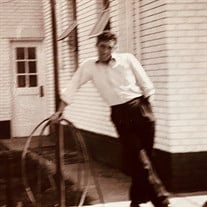 Orie F. Close, age 98, passed away on January 6, 2021. Orie was born on March 1, 1922, in Ladora, Iowa, to Raymond and Merl Close. Orie lived the life of self-reliance, independence, and hard work born of growing up during the Depression. Born on an Iowa farm with no electricity, no running water, and an outdoor privy, Orie and his siblings rode a horse named Queenie to school. At age 14 he left the farm and made his way to Indianapolis where he joined his sisters. Orie worked as a machinist until 1942 when he joined the Army. Orie served in the motor pool of the 351st Engineering Regiment until the end of World War II. He served in England working on numerous projects, including Eisenhower’s Headquarters at Bushy Park, landed on Utah beach in August of 1944 after D-day, and was in the Ardennes in Luxembourg during the Battle of the Bulge. He was honorably discharged as Technical Corporal in 1945. After returning stateside Orie married Mary Joyce Mills (“Joyce”) and built a successful career and business as a plumber. Hard working and frugal, the couple never paid a penny of interest on a home or any other purchase during their lives. Joyce predeceased Orie in 1992. Orie continued to live an independent and self-sufficient life. In his late eighties he suffered a hand injured that finally caused him to go to the ER. When asked if he had received a tetanus shot, he replied in the affirmative. When asked when, his reply was “World War !!”. He continued driving to meet “the boys” every morning for coffee at McDonalds until he was 94. Orie is survived by the apples of his eye, daughter, Janet Bouwkamp (Alan); and his granddaughter, Cat Bouwkamp of Colorado Springs, Colorado. In 2010 Cat participated in a fencing World Championship competition in the Grande Palais in Paris, across the street from the Petite Palais where Orie had been encamped 65 years earlier in the War. The family expresses their appreciation to the staffs of the Bickford in Carmel and the Reserve that made Orie’s final years safe and comfortable. There will not be a calling or public service. Within the month prior to his death, in one last display of his toughness, Orie contracted COVID-19, was hospitalized, beat it with the assistance of medicine, and had returned home.

Orie F. Close, age 98, passed away on January 6, 2021. Orie was born on March 1, 1922, in Ladora, Iowa, to Raymond and Merl Close. Orie lived the life of self-reliance, independence, and hard work born of growing up during the Depression.... View Obituary & Service Information

The family of Orie F. Close created this Life Tributes page to make it easy to share your memories.

Send flowers to the Close family.