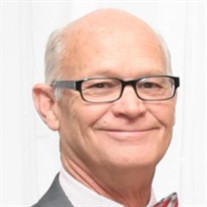 Michael Joseph Jung 70, of Fishers, passed away May 16, 2021. He was born June 23, 1950 in Elwood, IN to the late Joseph and Elsie Jung, but lived most of his life in Tipton, IN. He attended Tipton High school and started his adult life there. He worked for almost 20 years as an instructor at Kokomo’s IVY Tech campus, teaching engineering, industrial and CAD design. He then began working as a structural designer for TerHorst Lamson and Fisk Engineering in 1996 and worked there until his retirement in 2016. Michael married Connie (Crump) in 1996 and with that union brought two families together, Michael’s two sons, Ryan and Chad and Connie’s two daughters, Lauren (Guynn) and Whitney (Sumpter). Michael did not hesitate to be a father to the girls and always loved them as his own. Michael loved photography and was constantly stopping for just the right shot. He and Connie enjoyed hiking and spending time at their cabin in Red River Gorge. His love for nature was prevalent in his photography. Michael is survived by his loving wife of 25 years, Connie L. Jung, children, Ryan Michael Jung and his wife Kelly; Chad Anson Jung and his wife Alison; Lauren Guynn and her husband Stephen; Whitney Sumpter and her husband Nick; his sister, Judy Foster, and grandchildren Sydney, Thatcher, Wyndham, Kipling, Max, Zoey, Hailey, and Ty. He was preceded in death by two of his sisters, Janis and Barb and brother-in-law John. He adored all of his nieces and nephews and cherished the time he spent with each and every one of them. Michael was a peaceful steady force to everyone that met him. He was a man of little words but made connection with everyone he met. He loved life and wanted to live it to its fullest. But mostly – it was his love for his family – that was his highest priority. His quiet assurance was the foundation of our family and it will be sorely missed. A Celebration of Michael’s Life will be held Monday, June 7, 2021 at 6:00 p.m. at the Rathskeller’s Biergarten, 401 East Michigan Street, Indianapolis. Per Michael’s request, Jennie DeVoe and her band will be performing. In lieu of flowers, memorial contributions can be made to the National Forest Foundation to honor his love for Red River Gorge. https://support.nationalforests.org/give/319564/#!/donation/checkout?c_src=WEB&c_src2=UNR0000WEBOrangeTribute

Michael Joseph Jung 70, of Fishers, passed away May 16, 2021. He was born June 23, 1950 in Elwood, IN to the late Joseph and Elsie Jung, but lived most of his life in Tipton, IN. He attended Tipton High school and started his adult life there.... View Obituary & Service Information

The family of Michael Joseph Jung created this Life Tributes page to make it easy to share your memories.

Send flowers to the Jung family.