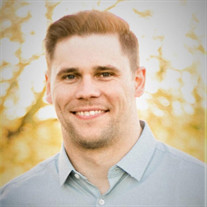 29, of Fishers, Indiana passed away unexpectedly on June 28, 2021. Matt was born in Madison, Wisconsin to Thomas Gerard Ripp and Mary Louise Ripp (Rutkowski). He went to high school at Hamilton Southeastern, and later received a Bachelor’s of Science in Criminal Justice at the University of Indianapolis. He worked with his father in Sales for Alro Steel, and through life was involved in high school & collegiate football, Holy Spirit Teen Life & CYO leagues, coached high school baseball, and assisted Special Olympics softball. Matt, born as one-of-two with twin brother Andrew, certainly did all he could to be one-of-a-kind. His all too short but incredibly full 29 years of life were filled to the brim with happiness and laughter, challenges and triumph, friendship and love, until his time ended June 29th, 2021. One might say, through some foresight, that Matt’s soul knew his reservation on Earth didn’t have long. Matt’s energy and athleticism began when he started walking at the age of 9 months and later led him to one of his many loves: football. He started early in 2nd grade pop-warner leagues in Naperville, IL. When he relocated to Fishers, IN, the “scouts” took notice and his athletic legacy began. Football at the ‘red barn’ led Matt to the HSE Knights and HSEJH, which got him ready for a 4-year varsity and 2-year All-State high school career, which took him to University of Indianapolis for his final five years of football. Although football was a focal point, Matt’s love for it never surpassed his love for family. Matt did absolutely anything for his two brothers: Andrew; his twin diagnosed with Autism at a young age, and Ryan; his younger brother who followed in his every footstep. Both returned the love like Matt was their superhero. It took Matt 28 years to find one last love: Meredith Burkart. With her, his family grew further, and his compassion, acceptance, and smile reached further still. Matt and Meredith are expecting a daughter to join big sister Quinn in late July of this year. Her name will be Mattie Louise Ripp. Matt is survived by his fiancé, Meredith Burkart; daughter, Mattie Louise Ripp; twin brother, Andrew James Ripp; brother, Ryan Thomas Ripp; mother, Mary Louise Ripp; father, Thomas Gerard Ripp; grandparents, James & Mary Ellen Ripp, and Frank & Rosalie Rutkowski; and many aunts, uncles, and cousins. Visitation will be Thursday, July 8, 2021 from 4:00 p.m. - 8:00 p.m. at Holy Spirit Parish at Geist, 10350 Glaser Way, Fishers, IN 46037. Funeral Mass will be 11:00 a.m., Friday, July 9, 2021 at Holy Spirit Parish at Geist. Burial will follow, with a luncheon afterward at Holy Spirit Parish at Geist. In lieu of flowers, donations to the Mattie L. Ripp Trust are suggested to aid in the happy life of Matt and Meredith’s daughter, Mattie Louise Ripp. To donate, mail cash or check to: Mattie L. Ripp Trust c/o William Lutz, Attorney, 8409 Fishers Centre Drive, Fishers, IN 46038. Or Venmo: @Mattie-RippTrust. Donations will also be happily accepted for the Special Olympics of Indiana at their website: https://soindiana.org Services are entrusted to Shirley Brothers Fishers-Castleton Chapel, 9900 Allisonville Road, Fishers, IN 46037.

29, of Fishers, Indiana passed away unexpectedly on June 28, 2021. Matt was born in Madison, Wisconsin to Thomas Gerard Ripp and Mary Louise Ripp (Rutkowski). He went to high school at Hamilton Southeastern, and later received a Bachelor&#8217;s... View Obituary & Service Information

The family of Mathew F. Ripp created this Life Tributes page to make it easy to share your memories.