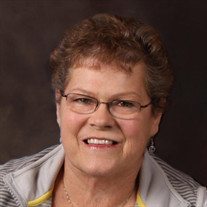 Mary Louise (Dean) Imes took her journey home to be with the Lord January 4, 2021. Born June 20, 1940 in Indianapolis, Mary Lou was the only daughter of the late John L. and Luella (Rogers) Dean. She grew up and spent her entire childhood in their Carmel, Indiana home with her older brother Jack and younger brother Jim. By age 12, Mary Lou took on many of the household responsibilities when her mother returned to school to finish her high school education. Carmel’s School was a single building at the time and contained grades K-12. Mary Lou often expressed how embarrassing it was to pass her grown mother in the hallways at school. However, a few years later, she honored her mother’s accomplishment of earning a master’s degree by sewing a custom dress for her graduation ceremony. Mary Lou used the remaining fabric from creating her own wedding gown. Mary Lou grew up in a very musical family and for her part she played the drums. Her complete drum set dominated the floor space of their small living room during high school. As a junior, she proudly marched with her snare drum with the band in the 1957 inaugural Indianapolis 500 Festival Parade. She graduated from Carmel High School in 1958 and was immediately off to southern California for reservationist training. She joked that she and her roommate were so broke that they exclusively ate oranges purchased for a penny a piece at the local fruit stand. Once her training was complete, she returned to Indianapolis to begin her career for Delta Airlines. Mary Lou loved to travel and her job with Delta allowed many impromptu trips. One of her favorites was to fly with her dad to Vegas. After a chance meeting and courtship, Mary Lou married Phil Imes in July 1962. She was soon blessed with her daughter Shelly. Five years later, her son Andy completed the family. Her dedication to her children was constant throughout their entire lives. She faithfully attended every activity to support them both - many times juggling multiple events in a day. Her continued love, encouragement and support for them grew even deeper into adulthood and then spread as they had children of their own. She began her second career once her children were in school. Beginning at Grain Dealers Insurance, then to State Mutual Insurance and finishing her career at New England Life as the Operational Manager. Upon retiring, Mary Lou continued her dedication to her family by caring for her mother. Mary Lou’s commitment and devotion to her family was even more apparent with the arrival of her grandchildren. The addition of Mark into Shelly’s life first brought Tori and Colson. A short time later, Andy and Tracy added three more in succession; Jordan, Carter and Graham. She also shared a very special bond with Phil’s daughter Jessica who entered her life at age 3. She dealt with the adversity of her dementia with dignity and grace just as she had done with all of the life challenges she had faced. Mary Lou also watched her brothers Jack and Jim as they fought the same fates. Mary Lou will be dearly missed by her entire family including: Daughter, Shelly (Mark) Rice and son, Andy (Tracy) Imes; grandchildren, Tori Rice, Colson (Kelsey) Rice, Jordan Imes, Carter Imes and Graham Imes; Jessica Imes. Mary Lou’s “Celebration of Life” service will be held Saturday, January 9, 2021 at 11:30 am. It pains each of us deeply that it is just not possible for you to join us in person. Unfortunately due to Covid 19 funeral restrictions and concerns for everyone’s safety, the in-person service will be attended by immediate family only. All guests are invited and welcome to attend via the zoom link below. We are hopeful many of you will be able to attend. Join Zoom Meeting https://us02web.zoom.us/j/89173893175 The Imes family also have tentative plans to host a larger in-person memorial gathering outdoors later this spring/summer to celebrate Mary Lou’s life with all family and friends. Future details to follow. In lieu of flowers, the family is requesting donations to the Pure Memory Mary Lou Imes Memorial. All funds will be used to be create a foundation to assist families with loved ones battling dementia. For donations to the memorial fund, kindly use the link below; http://purememorymarylouimesmemorial.mydagsite.com/

Mary Louise (Dean) Imes took her journey home to be with the Lord January 4, 2021. Born June 20, 1940 in Indianapolis, Mary Lou was the only daughter of the late John L. and Luella (Rogers) Dean. She grew up and spent her entire childhood... View Obituary & Service Information

The family of Mary Lou Imes created this Life Tributes page to make it easy to share your memories.

Mary Louise (Dean) Imes took her journey home to be with the...

Send flowers to the Imes family.