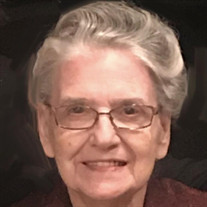 Martha G. Blevins, 83, of Indianapolis, passed away July 16, 2021. She was born November 25, 1937 in Memphis, TN to the late William Riley and Lena M. Fussell Mooney. She graduated from Charlottesville High School, Class of 1956 and married... View Obituary & Service Information

The family of Martha G. Blevins created this Life Tributes page to make it easy to share your memories.

Send flowers to the Blevins family.