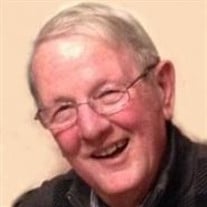 Malcolm W. Applegate, The world’s greatest Jayhawk fan, age 83, was called home to the Lord on October 20, 2019 surrounded by his beloved wife, Connie and youngest daughter, Paula. Malcolm was born on January 26, 1936 in Kansas City, MO to the late Florence E. Applegate and Paul W. Applegate. His family made WaKeeny, Kansas their home and Malcolm graduated from Trego Community High School in 1954 where he forged friendships on the basketball and tennis courts that lasted a lifetime. Tragedy struck the young family when Malcolm’s father died suddenly and he and his mother moved to Topeka, KS following graduation to rebuild their lives. Malcolm began his collegiate career close to home at Washburn University studying journalism, playing basketball and tennis. Even with the demands of being the Editor of the Daily Kansan, and a member of the KU Varsity tennis team and Sigma Phi Epsilon, Malcolm found time to court his high school sweetheart, the love of his life, Connie, who was attending Fort Hays State University. They married after graduation on July 12, 1959 in Hays, KS. Together the young couple began a lifelong journey that would take them from Salina, KS, where Malcolm began his long journalism career as a sports reporter for the Salina Journal and ended in Indianapolis. After getting a Master’s Degree from the University of Iowa (1961), career moves included positions on the faculty at both Fort Hays State University and the University of Kansas where Malcolm was the Assistant Dean of the Journalism School. Opportunity knocked in 1969 when Malcolm was offered the chance to join the growing Gannett Newspaper Co. and he, Connie and young daughters, Kellie and Paula were off to Rochester, NY…a long way from Kansas! Advancements with Gannett included stops in Ithaca, NY (Editor, Ithaca Journal 1971-1975), Lafayette, IN (Publisher, Lafayette Journal & Courier, Regional VP USA Today 1975-1986), and Lansing, MI (Publisher, Lansing State Journal, VP USA Today 1986-1990). In 1990 Malcolm assumed the role of President and General Manager of the Indianapolis Newspapers Inc. and Publisher of the Indianapolis Star until he retired. In addition to professional achievements, Malcolm carved out significant time to serve each and every community in which he resided. His passion for the work at Goodwill Industries, Big Brothers Big Sisters, United Way, Chamber of Commerce, and the 500 Festival along with numerous professional associations enriched his (and others) lives tremendously. He served those organizations with the same enthusiasm and integrity he brought daily to his career. Despite the demands of his professional and charitable work, Malcolm put family, friends and faith above all. His incredible devotion to his widowed mother for years was forever an example of what family ties mean. Son, husband, dad and poppa to his beloved four grandchildren were the titles he cherished most. Next in line was avid Jayhawk fan…which was consistently reflected in his wardrobe choices for many years. A prolific writer, engaging speaker, philanthropist, accomplished lifelong tennis player, gardener, shell collector, animal lover…Malcolm filled his 83 years on earth with footprints that will be treasured by family, friends, colleagues and communities forever. He leaves behind to cherish his memory, wife, Constance Applegate; daughters, Kellie Prusiecki (Drew) and Paula Quammen (Ron); and grandchildren, Katherine Prusiecki, Christopher Quammen, Matthew Quammen and Adam Prusiecki. A celebration of Malcolm’s life will be held Friday, December 20, 2019 at Shirley Brothers Fishers-Castleton Chapel, 9900 Allisonville Road, Fishers. The family will welcome friends from 10:00 a.m. until noon, followed by a memorial service. In lieu of flowers, memorial contributions are suggested to Child Advocates, Inc., 8200 Haverstick Rd., Ste. 240, Indianapolis, IN 46240, which serves and advocates for abused and neglected children in the Indianapolis area.

The family of Malcolm W. Applegate created this Life Tributes page to make it easy to share your memories.

Send flowers to the Applegate family.