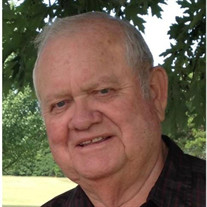 Rev. Lonzo Richard Wiggington was born on May 30, 1935 in Jabez, Kentucky, and departed this life on January 24, 2022, at the age of 86. He was predeceased by his parents, Marley Ray and Elsie McGowan Wiggington, his youngest son, Jeffrey Jay Wiggington, and his brother, Dallus Glenn Wiggington. He is survived by his wife of 67 years, Margaret Gwinn Polston Wiggington, his eldest son, Michael Ray (Theresa) Wiggington, grandson, James Richard (Sue Choi) Wiggington, granddaughter Amy Marissa Wiggington, brother, Donald Ray (Phyllis) Wiggington, two sisters, Hazel Martin and Doris Anderson, and several nephews, nieces, and cousins. Lonzo grew up on a farm, where they raised livestock, milked cows by hand, tilled the soil, worked tobacco, and cut timber. He learned the value of hard work and perseverance at an early age. He and his siblings were expected to pull their weight and complete their chores. He also learned the importance of having a close-knit family. They may have argued and quarreled with each other occasionally, but they would staunchly defend each other against anyone outside the family circle. He married his high school sweetheart, Margaret Gwinn Polston, in 1954. They raised two rambunctious boys, welcomed a sweet daughter-in-law, and spoiled two grandchildren. He was proud to tell people that he had been married to the same woman for 67 years. Lonzo was drafted into the Army and served from 1957 to 1959. He trained as a tank operator and earned honors as a marksman, but most of his military time was served as a cook. After he was discharged from the Army, Lonzo moved his family to Indianapolis to work in the automotive industry as a factory machinist. He was employed by International Harvester for 30 years, retiring in 1986 at the age of 51. He then launched himself into the business of buying, remodeling, and renting houses, and he was free to pursue his passion of working on lawnmowers and small tractors. Lonzo accepted Christ on August 21, 1959. He yielded to the call to preach, and he delivered his first sermon at Mt. Hope Separate Baptist Church in Russell Springs, Kentucky December 21, 1963. Over the next 58 years, he preached 6,164 sermons -- all of which were meticulously chronicled by his wife, Margaret. He pastored churches in Franklin, Columbus, and Indianapolis, and he finished his pastorship at Fellowship of Christ Baptist Church in Beech Grove, Indiana where he served for over 30 years. He was proud to be called old-fashioned. He preached what he believed and practiced what he preached. Lonzo lived life to its fullest. He knew great joy and loved being with family and friends. He was especially partial to children and was always delighted to be around them. He also knew sorrow and experienced every parent’s worst nightmare, the loss of his youngest son, Jeffrey Jay, in 1998. His faith and the support of his family helped him cope with this sudden tragedy. Lonzo loved John Deere tractors, biscuits & gravy, cornbread crumbled in buttermilk, and chocolate pie. He leaves behind a legacy of steadfastness and faithfulness to God, his family, his church, and his country. His was a life well-lived. He will be sorely missed by all.

Rev. Lonzo Richard Wiggington was born on May 30, 1935 in Jabez, Kentucky, and departed this life on January 24, 2022, at the age of 86. He was predeceased by his parents, Marley Ray and Elsie McGowan Wiggington, his youngest son, Jeffrey Jay... View Obituary & Service Information

The family of Lonzo Richard Wiggington created this Life Tributes page to make it easy to share your memories.

Send flowers to the Wiggington family.