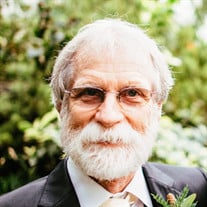 Larry Gene Müller, 72, of Indianapolis, formerly of Hutchinson, KS, passed away March 3, 2021. He was born August 31, 1948 in Hutchinson, Kansas, and was raised by his grandparents. Larry received his Associates Degree from Hutchinson Community College in 1973, and his Bachelor’s Degree from Wichita State University in 1976. He proudly served his country in the U.S. Air Force from 1968 to 1974, during the Vietnam War. He married Rebecca C. Moss, December 19, 1981, and was the owner/operator of Müller Enterprises. Larry was a member of Castleton United Methodist Church, Indianapolis. He was an avid sports fan and his favorite teams were the Kansas City Royals, the Kansas City Chiefs, the Indiana Pacers and the Indianapolis Colts. He also enjoyed gardening, motorcycling and traveling with his wife and family. Larry is survived by his loving wife of nearly 40 years, Rebecca C. Müller; sons, Eric Lloyd Müller and Michael Kuck Müller; grandchildren, Trippe, Knox, Olivia, Augustine and Theodosia Müller; brother, Joseph Miller; sister, Pam Mayley; and stepmother, Jane G. Miller. He was preceded in death by his father, Lloyd G. Miller; grandmother, Anne Miller; and sister, Cyndi Müller. Visitation will be Monday, March 8, 2021 from 1:00 p.m. until 2:00 p.m. at Shirley Brothers Fishers-Castleton Chapel, 9900 Allisonville Rd. Funeral services will be live-streamed and available at 3:00 p.m. by clicking on the following link: https://client.tribucast.com/tcid/39221127 In lieu of flowers, memorial contributions may be made to the Alzheimer's Association, 50 E. 91st Street, Suite 100, Indianapolis, IN 46240 or online at www.alz.org/indiana and/or Castleton United Methodist Church, 7101 Shadeland Avenue, Indianapolis, IN 46256 or online at www.castletonumc.org.

Larry Gene Müller, 72, of Indianapolis, formerly of Hutchinson, KS, passed away March 3, 2021. He was born August 31, 1948 in Hutchinson, Kansas, and was raised by his grandparents. Larry received his Associates Degree from Hutchinson Community... View Obituary & Service Information

The family of Larry Gene Müller created this Life Tributes page to make it easy to share your memories.

Send flowers to the Müller family.