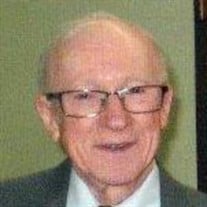 Kenneth Edward Kenipe, Sr., Passed away February 13, 2021. He was born March 7, 1932 in Indianapolis to the late Jennings, Sr. and Goldie Kenipe. Kenneth met Sarah Joan Mitchell in the third grade and went through grade school together. By the time they reached high school, Arsenal Technical High School, they were already boyfriend and girlfriend. After graduation in June 1950, they married July 9, 1950. He loved to travel. He and his wife, Joan visited all 50 states and 67 countries in the world. Kenneth was a member of St. Andrew United Methodist Church; and was a member of the Methodist church most of his life. He was very active in church work until he reached his 80’s and was unable to continue. He and his wife were also great high school basketball fans. They have attended most of the games that the Arsenal Tech team has played, both home and away, since 1946. They are only three games short of attending 1,500 Varsity boys basketball games. This is a record that will probably never be broken. Visitation will be Saturday, February 20, 2021 from 12 noon until the time of service at 1:00 p.m. at Shirley Brothers Thompson Road Chapel, 3333 E. Thompson Road. Kenneth is preceded in death by his wife of 69 years, Joan; son, Kenneth, Jr.; grandson, Jamison Clemons; three brothers, Jennings, Jr., Donald and William; three sisters, Pauline, Thelma and Judith; and other family members. He is survived by his daughter, Vicki Clemons; daughter-in-law, Pam Kenipe-Senkovic; five grandchildren; 11 great-grandchildren; brother, Robert; sisters, Betty and Mary; and numerous nieces, nephews and family members.

Kenneth Edward Kenipe, Sr., Passed away February 13, 2021. He was born March 7, 1932 in Indianapolis to the late Jennings, Sr. and Goldie Kenipe. Kenneth met Sarah Joan Mitchell in the third grade and went through grade school together.... View Obituary & Service Information

The family of Kenneth E. Kenipe, Sr. created this Life Tributes page to make it easy to share your memories.