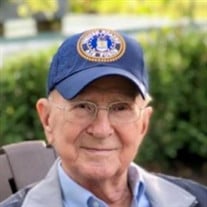 Kenneth L. DeHart, 93, passed on peacefully at St. Vincent Hospital, January 16, 2021, due to complications from Coronavirus. Kenneth grew up & attended school in Monticello, Kentucky. When he was only 17 years old, he enlisted in the US Navy to serve in the Pacific conflict of WWII. He was deployed on the maiden voyage of the USS Bonhomme Richard aircraft carrier. He quickly became adept as a lookout scout for mines & enemy aircraft. He was credited with the sighting of the earliest detection of an in-coming bogey. His excellent vision also afforded him a distant view of the signing of the peace treaty in Tokyo Bay. After WWII, he moved to Muncie, Indiana, completed his high school degree, enlisted in the Air Force Reserves, teaching aerospace classes. He graduated from Ball State Teachers College, studying Teaching & Business and was a member of the Lamda Chi Apha fraternity. After 38 years in the Reserves, he achieved the distinguished rank of Lt. Colonel and retired in 1979. Following his graduation from Ball State, he was hired by Daleville High School, teaching Industrial Arts & Typing for 4 years. In the ensuing years, Ken began his long and successful career with Indiana Gas Company, first in Marion then many years in Muncie, Indiana and later transferred to Indianapolis. During his tenure he became Director of Marketing and earned numerous Top Salesman of The Year awards and retired 1987. Always one to be on the go, Ken enjoyed driving, boating, piloting and traveling. He was a member of the Masonic Lodge in Muncie, Murat Shrine of Indianapolis and the Elks Club of Mesa, AZ. During his retirement he remained active selling used cars and in 1990, he married his loving wife, Fran. Together they enjoyed playing tennis, dancing, traveling across the US in their RV, visiting family and spending countless winters in Greenfield Village of Mesa, AZ. In 2018, they moved to Robin Run Village Indianapolis Brookdale Senior Living. It’s been said of him that he never met a stranger. He often helped his neighbors and others with assistance & tools for any home or auto project. Ken will be missed by many for his love and will always be admired for his many skills & capable talents. Kenneth was preceded in death by his parents Clarence & Dorcus (Dottie Koger) DeHart, his sisters Pauline Barrier & Doris Ivey and his son, Kenneth Lee DeHart II. He is survived by his loving wife, Fran, his daughter Alice Battas (Dave), his son Dan DeHart (Colleen), his stepsons David & Mark (Tracy) Szalaiy, his half-brother Hollis (Jane) DeHart, his half-sister Margaret (Tom) Mcvey, four grandchildren Kenneth L. DeHart III, Lexi, Christopher, Nicholas, 6 step grandchildren, 6 step great grandchildren, niece Barbara Akers, nephew Jim (Nancy) Barrier, niece Paula Flynn, nephew Jack Ivey and several cousins. There will be a military honor service memorial at a later date. Arrangements by Shirley Brothers Mortuary of Indianapolis.

Kenneth L. DeHart, 93, passed on peacefully at St. Vincent Hospital, January 16, 2021, due to complications from Coronavirus. Kenneth grew up & attended school in Monticello, Kentucky. When he was only 17 years old, he enlisted in the US Navy... View Obituary & Service Information

The family of Kenneth Lee DeHart created this Life Tributes page to make it easy to share your memories.

Send flowers to the DeHart family.