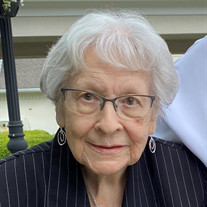 Julia L. Dawson, 101, of Indianapolis, passed away March 24, 2022 at Greenbriar Village. She was the daughter of Beulah C. and Orrie D. Lewis, born in Indianapolis on March 30, 1920. She had one sister, Janet Sommerville (James L.) born in 1930. Her mother lived to be 103 and passed away in 1995. Her father died at age 47 in 1936 when Julia was a senior at Arsenal Technical High School. She attended elementary school at IPS #57 at Ritter and Washington Streets, graduating in 1933 and from Arsenal Tech in 1937. The morning after her high school graduation, she started to work as a clerk at the Indiana National Bank in Indianapolis where she worked for about a year and a half. At that time, many businesses did not retain female employees who married-they were asked to resign. She and Deo A. Dawson, whom she met among a group of Irvington school friends, were planning marriage, so she changed jobs to enable her to continue working and became a Service Representative in the business office at Indiana Bell Telephone Company where she worked for over 40 years. She and Deo were married for 64 years. He passed away in 2005 at the age of 89. Julia served at the telephone company on several assignments. In June 1960, she was appointed secretary to the President, the first of eight Indiana Bell presidents for whom she worked during the next 21 years until she retired in 1982. The only break she had in her Indiana Bell service was during World War II, when she was away for a couple of years when Deo was in the Navy, assigned to the Photo Science Lab at Andrews Field in Washington, D.C. They lived in Greenbelt, Maryland. After the war, they returned to Indianapolis to live on the east and north sides of the city. In 1960, they moved into a new home they had built on Whippoorwill Lane in Morgan County, where they lived for 27 years, commuting to Indianapolis for work. After free-lancing for several years, Deo became a partner in a commercial arts studio (MTD) until he retired in 1983. Julia and Deo loved their various homes, including a condo they owned for several years in Jupiter, Florida, but Indiana was always their home. They enjoyed having a nice house and yard and were happy spending their “free” time maintaining them. Prior to owning their Florida condo, they enjoyed traveling, including brief trips to Asia and Europe, but they were always glad to get “home”. Having no children, they felt close to her sister’s four, and Deo’s brother and two boys. They were also active in church over the years. They were married in Brookside United Methodist Church in 1939, and belonged there for many years. Later, they transferred to the Plainfield UMC and then to Old Bethel UMC, Indianapolis, after they could no longer keep up the lake home and property, and moved to Plainfield, then back to Indianapolis next door to Janet and Jim. It was a few short years until Deo passed away, with Jim following a couple of years later. Soon after, Janet contracted a serious medical problem and had to sell her home and move to an assisted living home. Julia was 93 years old and felt she’d probably have to make such a move before long, and that perhaps she could be helpful to both Janet and herself if she moved to the same home. So, in 2013, they both moved to what was Greentree at the time. Janet lived there only a short time before moving to a home better able to take care of her needs. Julia continued to live at what is now Greenbriar Village until her death. Julia loved music and in addition to singing in church choirs, she played both piano and organ for many years. She also enjoyed growing and working with flowers. Should anyone choose to send memorial flowers for her, she would have appreciated them very much; however, if they wish to send a monetary memorial, it is suggested to be sent to Old Bethel United Methodist Church Choir Fund, 7995 E. 21st Street, Indianapolis, IN 46219. Funeral services will be held Tuesday, March 29, 2022 at 1:00 p.m. at Old Bethel United Methodist Church, 7995 E. 21st Street, with visitation one hour prior. She will be placed in their crypt at Washington Park East with her husband, Deo. No services will be held at the cemetery following the service. Final care and arrangements are entrusted to Shirley Brothers Washington Memorial Chapel.

Julia L. Dawson, 101, of Indianapolis, passed away March 24, 2022 at Greenbriar Village. She was the daughter of Beulah C. and Orrie D. Lewis, born in Indianapolis on March 30, 1920. She had one sister, Janet Sommerville (James L.) born in... View Obituary & Service Information

The family of Julia L. Dawson created this Life Tributes page to make it easy to share your memories.

Send flowers to the Dawson family.