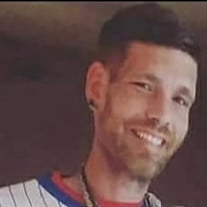 Joshua E. Johnson, 40, of Indianapolis, passed away March 20, 2022. He was born July 10, 1981 in Indianapolis to Doug and Susan Elsey Johnson. Josh was a graduate of Franklin Central High School, and was formerly employed with H. H. Gregg. Visitation... View Obituary & Service Information

The family of Joshua E. Johnson created this Life Tributes page to make it easy to share your memories.

Send flowers to the Johnson family.