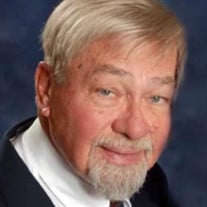 John Charles Willenbrock, 82, of Fishers, Indiana passed away peacefully January 17, 2022 with his beloved wife, Janie; and daughters, Laura and Chris by his side. He was born in New York City, May 20, 1939 to German immigrant parents, Klaus and Katerina, who instilled in him a love of Jesus and unshakeable faith in God. He developed a love of electronics at a young age, attended the prestigious Brooklyn Technical High School, and Concordia College in Bronxville, New York. At Valparaiso University he was an active member of Sigma Pi Fraternity and earned a degree in Electronics Engineering. There he met Janie, the love of his life. They married in January of 1963, and set up their home in Indianapolis, where John worked for 38 years at Naval Avionics Center (later Raytheon). He was involved in research and development as lead engineer of numerous systems for Naval aircraft, including a patent for specialized equipment. John was a loving father to Laura and Chris, sharing with them his interests in astronomy, photography, and woodworking. Together the family enjoyed little league softball coached by John and Janie, camping trips, swimming at the Rivi, sailing on Geist and waterskiing on Morse Lake. With Janie, John led the Luther League youth group at Cross and Crown Lutheran Church for several years. He sang bass in the choirs at Cross and Crown and Cornerstone Lutheran Churches. He used his gifts of leading worship with his voice and guitar in many places over the years, including Cursillo ministries. Over twenty years, he led music for Connection Ministries and then Friendship Saturdays at Carmel Lutheran Church for adults with intellectual disabilities. He served faithfully in a variety of other roles in church throughout his life, including President of the Cross and Crown congregation. John was a member of the Indianapolis Maennerchor for 43 years, serving as president several times. From the age of seventeen, John was an amateur radio enthusiast, communicating with fellow “hams” around the globe, via voice and Morse Code. John is survived by his loving wife of 59 years, Janie Willenbrock; daughters, Laura (Peter) Simpkins and Chris Willenbrock; granddaughters, Devin Simpkins and Hayleigh Simpkins; sister, Catherine Schmidt, nieces, Caran Kalish and Liz Young and their families; nephew, Jonathan Schmidt; cousin, Jack Willenbrock and his family; brother-in-law, John (Marsha) Anderson; nephews, Ben (Maggie) Anderson and their daughters, and Brock Anderson. John was valued for his integrity, quirky sense of humor, loyalty, and biblical wisdom. Our family chain is broken and nothing seems the same. But as God calls us one by one, the chain will link again. Visitation will be Friday, January 28, 2022 from 10:00 a.m. until the time of service at 11:30 a.m. at Cornerstone Lutheran Church, 4850 E. Main Street, Carmel, IN 46032. John requested that we invite you to join us for a 'Beer 'n Brats' luncheon at the church following the service. Memorial contributions are suggested to Connection Ministries, P.O. Box 29495, Indianapolis, IN 46229.

John Charles Willenbrock, 82, of Fishers, Indiana passed away peacefully January 17, 2022 with his beloved wife, Janie; and daughters, Laura and Chris by his side. He was born in New York City, May 20, 1939 to German immigrant parents, Klaus... View Obituary & Service Information

The family of John Charles Willenbrock created this Life Tributes page to make it easy to share your memories.

Send flowers to the Willenbrock family.