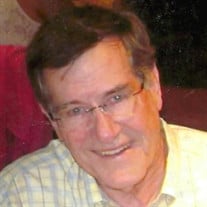 John R. Schutt, 7/12/1936-09/21/2021 John R. Schutt, 85, a lifelong resident of Indianapolis, died peacefully September 21, 2021. John graduated from Purdue University with a degree in Civil Engineering. After graduation, he joined the R.L. Schutt Company, Inc., a local bridge and road construction company. John built many Indiana landmark projects, including the 38th Street Bridge, the Keystone Avenue Bridge over the White River, and the Indianapolis Downtown I-65/I-70 interchange, which is being replaced in 2021 after 50 years. In 1984, John and his wife, Janet, opened Schutt Lookabill Co., Inc. Although much smaller in scale than “R.L.,” they were proud to have built many important projects, including the Kessler Boulevard Bridge over the Canal, the Washington Street Bridge near Howe High School (John’s Alma Mater), and phase one of the Monon Trail. John’s true passion, beyond work and family, lies squarely in the game of golf. His family home was on the corner of 10th Street and Sheridan, looking out over the 15th hole of Pleasant Run Golf Course. He honed his skills on that course to become one of the most competitive players in Indianapolis. John won multiple tournaments, including Pleasant Run, Old Oakland, Hillcrest, and the City Amateur Championship. He truly loved the game of golf and played it with dignity and genuine respect for all of its traditions. Rarely did you see John without a golf club in his hand, whether on or off the course. A bedrock of his life was Irvington Presbyterian Church. John was very active as a young parishioner and eventually earned his place as an Elder. He celebrated the marriages of his daughters, Susan and Liz, as well as many somber events. As the years passed, John enjoyed Sunday evening Vesper services and Sharing and Caring Sunday dinners. But it was the men’s bible study that brought him the most joy, as he brought Taylor’s bakery treats to the guys, and more importantly, found profound meaning in the bible study discussions. All of these aspects of John’s life were important, none matched the love of his children, Susan, Liz and Steven. John adored spending time with them in their activities, from horseback riding to martial arts, to a shared appreciation of books, poetry, scientific discovery, and philosophizing on just about any subject. John loved his five grandchildren and had boundless pride in their successes, not to mention the thrill of becoming a great-grandfather of adorable twin girls. John was also a proud military service member of the United States Army Reserve, serving as a First Lieutenant in the Classified Aerial Photography Division. John was preceded in death by his mother, Veda Rogers Schutt; father, Ray; sisters, Jane Gran and Anne Stein; and brother, Roger. John is survived by Janet, his loving wife of 37 years; his daughters, Susan (Glen) Susdorf and Elizabeth Scott; son, John “Steven” Schutt; five grandchildren, Diane Susdorf, Gail (Ben) Miller, Chloe (Logan) Gore, Jack (Stephanie) Rainbolt and Lindsey Rainbolt; and two great-granddaughters, Nora and Emma Miller. A Memorial Service will be held Thursday, October 21, 2021 at 12 noon at Irvington Presbyterian Church, 55 Johnson Avenue, with calling one hour prior. The service can be attended in-person or virtually via Facebook and YouTube. For the care and safety of all who attend, the church has an enforced mask mandate. In lieu of flowers, memorial contributions may be to Irvington Presbyterian Church. Final care and arrangements are entrusted to Shirley Brothers Fishers-Castleton Chapel.

The family of John R. Schutt created this Life Tributes page to make it easy to share your memories.

Send flowers to the Schutt family.