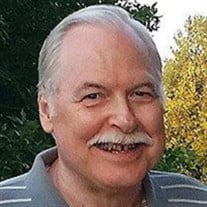 John D. Penn, 76, passed away June 20, 2021. He was born November 18, 1944 in Arlington, Virginia to the late John E. and Mary E. (Minshall) Penn. John attended Little Flower Grade School and was a 1962 graduate of Scecina Memorial High School. He served in the U.S. Air Force during the Vietnam War, and was stationed in Tucson, Las Vegas, Thailand and Japan. John attended Butler University and IUPUI, earning an Associate’s Degree in Business Administration. He married Carol (Jonta) Penn in 1971 and they celebrated their 50th anniversary in April. John loved to travel, play golf and was a good bowler. He also loved photography and was an avid baseball, basketball and football fan. Notre Dame, IU, Butler, the Cincinnati Reds, the Colts and Pacers were his favorite teams. John is survived by his loving wife, Carol; his sisters, Mary Ann Rolando of Plymouth, MN and Dale Madelans (Jim Flower) of Aurora, CO; and many nieces, nephews and cousins. His sister, Donna Kramer, preceded him in death. Visitation will be Wednesday, June 30, 2021 from 12 noon until the time of service at 1:30 p.m. at Shirley Brothers Washington Memorial Chapel, 9606 E. Washington Street. In lieu of flowers, you may wish to make a memorial contribution to your favorite charity.

The family of John D. Penn created this Life Tributes page to make it easy to share your memories.

Send flowers to the Penn family.