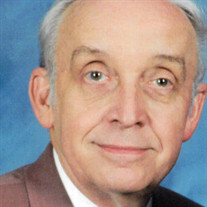 John Lewis Kanouse, 83, who taught history at Arsenal Technical High School for 38 years, and was a dedicated member of East Tenth United Methodist Church nearly all his life, passed away March 18, 2021. John was born on Christmas Eve 1937 to the late John Maxwell and Clara M. (Lewis) Kanouse. He was an Arsenal Tech student himself, graduating in 1956. He earned a Bachelor’s Degree from Indiana Central (now Univ. of Indianapolis) in 1960 and a Master of Arts from Butler University in 1966. John married Carolyn (Auter) Kanouse in 1960 at East Tenth United Methodist, where he had been a member since childhood. They had one son, Steven Lewis Kanouse, born in 1967. John’s career as a teacher spanned 41 years. For the first three years, he taught at Perry Central High School in Boone County. He spent the next 38 teaching history at Arsenal Technical High School, including 10 years as chair of the history department. John loved basketball and for many years attended the games at Tech, as well as those at the University of Indianapolis. John loved baseball too, and was a lifelong fan of the San Francisco Giants. At East Tenth United Methodist, John served as a Sunday school teacher, lay leader, youth worker and as a member and chair of many committees. John lived his life quietly serving God, his family, and the community. He spent his final years at Greenwood Village South, where he was given compassionate care as he dealt with Parkinson’s and Alzheimer’s diseases in his same quiet way. Visitation will be held Tuesday, March 23, 2021 from 11:00 a.m. until the time of service at 1:00 p.m. at Shirley Brothers Washington Memorial Chapel, 9606 East Washington Street. John is survived by his loving wife of 60 years, Carolyn Kanouse. He was preceded in death by his son, Steven Lewis Kanouse. In lieu of flowers, contributions may be made to East Tenth United Methodist Church and/or Arsenal Technical High School Alumni Association.

The family of John Lewis Kanouse created this Life Tributes page to make it easy to share your memories.

Send flowers to the Kanouse family.