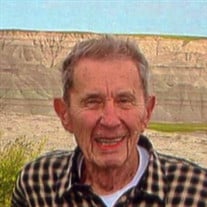 John Joseph Adrian age 99, a lifelong resident of Indianapolis, passed away peacefully April 18, 2022. John was born December 1, 1922 to Joseph and Alma Kreutzer Adrian. John graduated from Arsenal Tech High School, Class of 1940 and served his country in the U. S. Army in the Philippines during WW II. He married Jean Marie Norton October 5, 1946, and she preceded him in death July 19, 2012. John was an Engineer for Ford Motor Company for 24 years, retiring in 1990. He was a charter member of Holy Spirit Catholic Church, a member of the Knights of Columbus, and the Jolly 22 Club at Our Lady of Lourdes. John was an avid fisherman and loved to travel with his children and grandchildren. A Mass of Christian Burial will be held Friday, April 22, 2022 at 10:30 a.m. at Holy Spirit Catholic Church, 7243 E. 10th Street, Indianapolis, with visitation from 9:30 a.m. until the time of Mass. John is survived by his children, James J. Adrian (Cecilia), Daniel Adrian, Marianne Cooper (Steve), Susie Moore (Rick), Joe Adrian (Dede) Theresa M. Helfrich (Mike); 19 grandchildren and 35 great-grandchildren. John was preceded in death by his parents; and his siblings, William A. Adrian, Norbert E. Adrian, and Mildred Williams. In lieu of flowers, memorial contributions may be directed to Holy Spirit Catholic Church, 7243 E. 10th St., Indianapolis, IN 46219. Shirley Brothers Washington Memorial Chapel, 9606 E. Washington St., is honored to serve the Adrian family.

The family of John J. Adrian created this Life Tributes page to make it easy to share your memories.

Send flowers to the Adrian family.