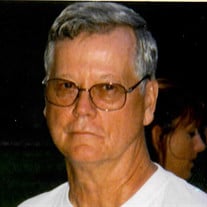 Joe Cyrus Davis, 83, of Indianapolis, passed away April 24, 2021. He was born January 31, 1938 to the late Frank and Marie (Ray) Davis, the youngest of seven children. He grew up in Solsberry, IN, and Sandborn, IN. Joe graduated from Pleasantville High School, where he was on the basketball team and was in some of the school plays, just to make his favorite teacher happy. Being the last one living at home with his mother, Joe took care of her. Joe joined the U.S. Army in 1962, and fought in the Bay of Pigs Invasion. Upon his honorable discharge, he worked at various places while he continued to look after his mother and supported her. He fell in love with Peggy Williams, and married her November 5, 1966. Although they didn’t have children of their own, he loved kids and they all loved him. Even in his latter years, he treated some as his own. Joe retired from Roth Meats Packing House in Indianapolis. He lost the love of his life March 14, 2011, after 44 years of marriage. Visitation will be Wednesday, April 28, 2021 from 12 noon until the time of service at 2:00 p.m. at Shirley Brothers Washington Memorial Chapel, 9606 East Washington Street. Joe was preceded in death by his parents; brothers, John Davis and wife Marie, and infant, George Davis; sisters, Mildred Flater and husband Wayne, Wilma Hunter and husband Bill, Marcella McDaniel and husband Paul, and Betty Alexander and husband Howard; and beloved pets, Little Joe and Angel. Joe is survived by his nephews, Terry McDaniel and wife Debby, Doug Alexander and wife Eve; nieces, Elaine Traylor and husband Lynn, and Jeanie Kirkley; and several great-nieces and great-nephews.

Joe Cyrus Davis, 83, of Indianapolis, passed away April 24, 2021. He was born January 31, 1938 to the late Frank and Marie (Ray) Davis, the youngest of seven children. He grew up in Solsberry, IN, and Sandborn, IN. Joe graduated from Pleasantville... View Obituary & Service Information

The family of Joe Cyrus Davis created this Life Tributes page to make it easy to share your memories.

Send flowers to the Davis family.