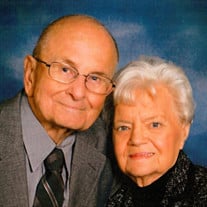 Joanne Alberta Lindeen Nauman, 88, went to her heavenly home February 2, 2021. She was born December 10, 1932 to Albert and Ellen Lindeen in Frankfort, KS. She grew up during the depression years with two older brothers and two younger sisters. In high school Joanne excelled in business subjects which served her well later on. After graduation she was employed in the offices of Southwestern Bell Telephone Co. in Kansas City, MO. Joanne later worked as a bookkeeper for the Kansas Crop Improvement Assn. on the Kansas State College campus. In 1952, she married her high school sweetheart, Delbert Nauman. His work after graduation took them to Tulsa, Oklahoma where Jo Deaun was born, then to Wichita, Kansas where Mark was born. The space industry lured Del to Huntsville, Alabama and Cape Canaveral, Florida. Joanne spent her time as a homemaker. In Huntsville she studied Braille in order to transcribe religious material for the blind. In Florida Joanne became an Avon lady and used every opportunity to witness her faith. She taught Sunday school and VBS and sang in the church choir. In Indianapolis, Joanne worked as a bookkeeper for Hibbens, Inc. and later in the offices of Rodefeld Co. and Hook’s Drug Co. She chose Trinity Lutheran Church as her church home where she was an active member of Trinity Circle and it’s quilting group. Many quilts were anchored and tied in her living room. Joanne also enjoyed her duties as a volunteer at Community East Hospital. She was very proud of and devoted to her family and loved by all who knew her. Survivors include her daughter, Jo Deaun Ballard (Mike); son, Mark A. Nauman (Patty); six grandchildren, Brian Davis, Melissa Ballard, Robert Nauman, Natalie Steger, Michael Nauman and Audra Nauman; and five great-grandchildren, Adler, Rowan, Arden and Monroe Davis and Hudson Steger; and sister, Helen Neeman of Nebraska. She was preceded in death by her husband and love of her life, Delbert Nauman, who passed away June 28, 2020; her parents, Albert and Ellen Lindeen; brothers, Bill and Roy Lindeen; and sister, Joy Claycamp. Visitation for Joanne and Delbert will be Saturday, February 13, 2021 from 10:00 a.m. until the time of service at 11:00 a.m. at Trinity Lutheran Church, 8540 E. 16th St., Indianapolis. Maybe you made a call or said a prayer; however you embraced our family, we thank you from our hearts for all your love and caring. Special thanks to the Brookdale Hospice Team (Rhonda, Donise, Janetta, Rhiannon and all) and everyone at Springhurst for their wonderful care and love of our parents. Memorial contributions may be made to Trinity Lutheran Church, 8540 E. 16th St., Indianapolis, IN 46219.

Joanne Alberta Lindeen Nauman, 88, went to her heavenly home February 2, 2021. She was born December 10, 1932 to Albert and Ellen Lindeen in Frankfort, KS. She grew up during the depression years with two older brothers and two younger sisters.... View Obituary & Service Information

The family of Joanne A. Lindeen Nauman created this Life Tributes page to make it easy to share your memories.

Send flowers to the Nauman family.