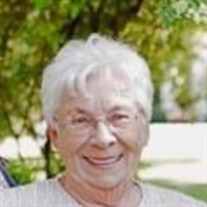 JoAn M. Baldwin, 94, passed away on January 5, 2021. A lifelong Indianapolis resident, JoAn was born May 14, 1926 to John Francis Schmitt and Hallie (Shaw) Schmitt. She had one sister, Dorothy (Schmitt) Holdaway who preceded her in death. JoAn graduated from Arsenal Technical High School, and following her graduation, JoAn worked at Indiana Bell Telephone Company and later for Indianapolis Public Schools No. 54 and No. 101. The latter working with children in the reading intervention project. JoAn loved enjoyed working with small children and seeing the success they achieved. On July 3, 1948, JoAn married Bryce R. Baldwin at Holy Cross Catholic Church, beginning a 64-year marriage focused on faith, family, and values. Community and church were very important to JoAn and she volunteered in a variety of additional community projects including extended work with the Community Hospital East Guild. JoAn was a member of Holy Spirit Catholic Church since 1958, and actively participated in the quilting club (the “basement ladies” as they liked to be called), which produced quilts for fund raising and various parish outreach projects. Her needle work and sewing talents served this group and others well. Bryce and JoAn traveled extensively, including an anniversary river cruise in Europe, but her favorite destination was Disney World where she particularly liked to visit the Disney Park with her children and grandchildren. JoAn enjoyed golf, strolling on the beach and their home in Cape Coral, Florida until Bryce’s passing in 2013. JoAn’s most important role was being a mother to her three daughters, welcoming her sons-in-law into the family, and doting on her six grandchildren and 12 great-grandchildren. JoAn leaves her family and friends with memories of her vivacious and caring personality, laughs, quilts, and the wisdom of a life well lived. JoAn is survived by her three daughters, Deborah Baldwin (Jim Metzger), Susan (Jim) Torzewski and Bonnie (Jim) Payton. JoAn has six grandchildren and 12 great-grandchildren. Visitation will be Monday, January 11, 2021 from 12:30 p.m. until the time of service at 1:30 p.m. at Shirley Brothers Washington Memorial Chapel, 9606 E. Washington St. For those unable to attend a live stream will be available by clicking on the following link: https://client.tribucast.com/tcid/5322096 Memorial contributions are suggested to the American Cancer Society.

JoAn M. Baldwin, 94, passed away on January 5, 2021. A lifelong Indianapolis resident, JoAn was born May 14, 1926 to John Francis Schmitt and Hallie (Shaw) Schmitt. She had one sister, Dorothy (Schmitt) Holdaway who preceded her in death.... View Obituary & Service Information

The family of JoAn M. Baldwin created this Life Tributes page to make it easy to share your memories.

Send flowers to the Baldwin family.