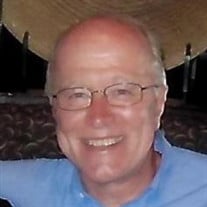 James L. “Jim” Spitler, 69, of Fishers, passed away March 14, 2022. He was born October 25, 1952 in Dayton, Ohio to Harold L. and Rita L. Spitler. Jim was a 1971 graduate of Archbishop Alter High School, Kettering, OH and received his bachelor's degree from the University of Cincinnati. He married Barbara J. Stemley, July 14, 1973. Jim was in the food service industry for over 40 years, most recently retiring from Performance Food Service in March 2020. He was a member of St. Louis de Montfort Catholic Church. A Mass of Christian Burial will be held Wednesday, March 23, 2022 at 12 noon at St. Louis de Montfort Catholic Church, 11441 Hague Road, Fishers, with visitation one hour prior. For those unable to attend a live stream please click on the following link: https://sldmfishers.org/live-stream-funeral-masses-at-sldm Jim’s family was his everything, and he looked forward to Sunday family dinners. He enjoyed the outdoors and gardening, and both he and his grandson Julian loved picking tomatoes and peppers together each week. Jim’s love of sports was passed on to his children and grandchildren, and they enjoyed watching football with him on Sundays. He was a huge fan of the Colts, Cincinnati Reds, and he never missed an Ohio State game. Jim is survived by his loving wife of 48 years, Barbara J. Spitler; children, Amy M. Spitler, Dan L. Spitler (Natalie) and Michelle L. Spitler (Riley Draper); grandchildren, Julian Michael Spitler, Luca Riley Draper, Xander Draper, Mason Draper and Jaiden Draper; mother, Rita L. Spitler; and sister, Nancy Spitler. Jim’s father, Harold L. Spitler, preceded him in death.

The family of James "Jim" L. Spitler created this Life Tributes page to make it easy to share your memories.

Send flowers to the Spitler family.