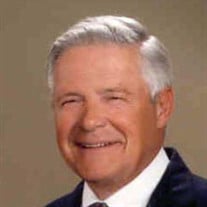 James Perry Hull, 96, of Carmel, Indiana, passed away October 25, 2021. He was born September 6, 1925 in Huntington, Indiana to the late Seymour and Dorothy Hull. James proudly served his country in the U.S. Air Force, and married Patricia Fricke November 28, 1953. Jim attended Huntington High School where he was on the swim team and football team. Following his service during World War II, he attended Indiana University, and graduated in 1950 with a BS in Business. Jim was the owner of Elgin Water Care since 1952, which started in 1946 by his father Seymour. The business is still run by his son Doug to this day, and Elgin Water Care is currently the oldest business in Broad Ripple. Jim and Pat loved to travel and have been all over the world including Australia, China, Tahiti, most of Europe, and both Central and South America. Jim also loved spending time with his family at his home on Lake James in northern Indiana. He was a longtime member of St. Luke’s United Methodist Church, Bible Study Fellowship, The Junto Club, a 50-year member of The City Club and Beta Theta Pi fraternity. Jim is survived by his loving wife of nearly 68 years, Patricia Hull; sons, Doug Hull (Sally) and Tim Hull (Molly); grandchildren, Sarah (Brandon) Brown, Laura (Shane) Nevers, Jennifer (Matt) Haas, Nicholas Hull and Madeline Hull; as well as eight great-grandchildren. A Memorial Service will be held Tuesday, November 16, 2021 at 11:00 a.m. at St. Luke’s United Methodist Church, 100 West 86th St., with a reception to follow. The service may be live streamed at www.stlukesumc.com/funeral. Memorial contributions may be made to Doctors without Borders, P.O. Box 5030, Hagerstown, MD 21741 and/or Community Humane Center, 780 Shelter Lane, Angola, IN 46703. Final care and arrangements are entrusted to Shirley Brothers Fishers-Castleton Chapel.

James Perry Hull, 96, of Carmel, Indiana, passed away October 25, 2021. He was born September 6, 1925 in Huntington, Indiana to the late Seymour and Dorothy Hull. James proudly served his country in the U.S. Air Force, and married Patricia... View Obituary & Service Information

The family of James Perry Hull created this Life Tributes page to make it easy to share your memories.

Send flowers to the Hull family.