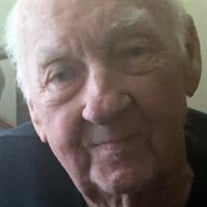 James Cummins, 90, of Indianapolis, passed away April 21, 2021. He was born March 31, 1931 to the late Ira D. and Corrine Cummins. Jim was a 1949 graduate of George Washington High School. He proudly served his country in the U.S. Army during... View Obituary & Service Information

The family of James Cummins created this Life Tributes page to make it easy to share your memories.

Send flowers to the Cummins family.