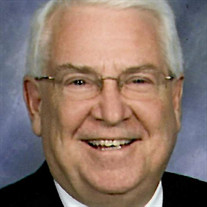 J. Mark Dill, 68, of Carmel, Indiana, passed away February 16, 2022. Mark was born March 12, 1953 to the late Lawrence and Velma Dill. Mark was also preceded in death by his brother, Mike Dill. Mark grew up on a farm in Warren County and attended Pine Village School before moving to Rensselaer in 1967 with his family where he graduated from Rensselaer Central High School in 1971 and was Senior Class President and also voted as “Most Friendly” by his classmates. He attended and graduated from Wabash College in 1975 where he was a proud member of Phi Delta Theta fraternity. Mark was the Fundraising Chairman for the new Phi Delta Theta House dedicated in September 2005. Mark always said there were two types of fraternity men at Wabash, there were Phi Delts and everybody else who wished they had been! Mark married his wife, Monica, September 2, 1989 and she survives along with his two nieces, Mary Dill Krow and Anne Marie Maitland; and his sister-in-law, Shelley Dill. He was a Precinct Committeeman for Hamilton County Republican Party, a member of Carmel United Methodist Church, Carmel Masonic Lodge #421 F. & A.M., Murat Shrine, Royal Order of Scotland and a 33rd Degree Scottish Rite Mason of the Indianapolis Valley of Scottish Rite. Mark received the distinguished 33rd Degree from the Scottish Rite in August 2008 in Providence, RI. Mark spent his career in finance, credit and sales and retired from the Scottish Rite Cathedral Foundation as Director of Development in 2015. Mark loved watching IU basketball, the New York Yankees and traveling with his wife Monica. They enjoyed trips to Paris, Rome, Venice, London, Caribbean Islands and his favorite, Maui. He loved to laugh, share jokes, and have a good time with his friends. If you were in Mark Dill’s world and held his trust you were a friend for life. He was a great son, brother, uncle, cousin, husband, and friend to all who knew him. Mark was one of the most personable and caring men you would ever meet and will be missed by all. Visitation will be Thursday, February 24, 2022 from 11:00 a.m. until the time of service at 2:00 p.m. at Shirley Brothers Fishers-Castleton Chapel, 9900 Allisonville Road, Fishers. Burial will immediately follow at Oaklawn Memorial Gardens. For those unable to attend the service will be livestreamed and available by accessing the following link: https://client.tribucast.com/tcid/3026679635 Memorial contributions in Mark’s memory may be made to the Indiana Masonic Home Foundation, 525 N. Illinois St., Indianapolis, IN 46204.

J. Mark Dill, 68, of Carmel, Indiana, passed away February 16, 2022. Mark was born March 12, 1953 to the late Lawrence and Velma Dill. Mark was also preceded in death by his brother, Mike Dill. Mark grew up on a farm in Warren County and... View Obituary & Service Information

The family of J. Mark Dill created this Life Tributes page to make it easy to share your memories.

Send flowers to the Dill family.