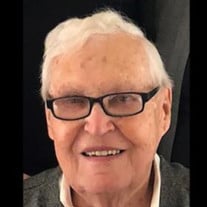 Gordon E. Peterson, 93, of Fishers, Indiana, passed away peacefully on January 27, 2022, surrounded by his loving family. He was born November 25, 1928 in La Crosse, Wisconsin, to the late Garfield and Esther Peterson. Gordon met Barbara June Goudy at a High School dance, graduated from Logan High School, and they were married in 1951. He graduated from Luther College in 1952, and received his Master’s degree in Music from Colorado State University in 1961. He taught band and orchestra in Decorah, Iowa, then Wisconsin and Minnesota. He changed careers to Whirlpool Corp, where he and his family eventually moved to St. Joseph, MI, New Orleans, LA, Naperville, IL and lastly Carmel, IN. It was here where he started and operated his own business, Central Microwave in Indianapolis, for 25 years. During this time he and his wife were faithful members of King of Glory Lutheran Church in Carmel, where he sang in the choir and loved to golf while June was involved in KOG Women’s Circle and the Women’s committee the Indianapolis Symphony. They loved their bridge groups, and after a 5 year part-time with Sears, he joined the New Horizons Band in Indianapolis, where he played French Horn. June passed away November 27, 2020, and soon after chose to become a member of North Ridge Gracious Living Retirement Center in Fishers. Gordon is survived by his daughters, Debbie Phillipi (Mark) and Barb Graves (Mike); daughter-in-law, Lori Peterson; grandchildren, Brian Phillipi (Katie), Kristin Mar, Scott Sikorski (Michelle), Susan Snodgrass (Skip), Lisa Weimer (Mike), Ben Graves (Jillian), Brady Phillipi (Michaela), and Josh Graves; sister, Helen Ranum; 16 great-grandchildren; four nieces; and two nephews. He was preceded in death by his son, Brent G. Peterson; and his wife, B. June Peterson, whose life will also be shared in this memorial celebration. Visitation will be Thursday, February 3, 2022 from 10:00 a.m. until the time of service at 11:00 a.m. at King of Glory Lutheran Church, 2201 E. 106th St., Carmel, IN 46032. Memorial contributions are suggested to King of Glory Lutheran Church. Final arrangements and care are entrusted to Shirley Brothers Fishers-Castleton Chapel.

The family of Gordon E. Peterson created this Life Tributes page to make it easy to share your memories.

Send flowers to the Peterson family.