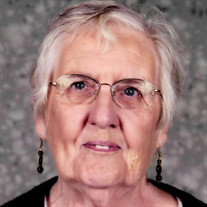 Gloria E. Dean, 87, of Fishers, IN, passed away November 10, 2020. She was born April 18, 1933 in Olney, IL, to the late Robert H. and Eva A. Dean. Gloria led a full life, loving and sharing with others. Even during her struggles with Alzheimer’s, she continued sharing her beautiful smile and offering to “drive” others to church. Throughout her life she taught Sunday school and even on her most difficult days in her final years, she continued “preparing her lesson and gathering the children”. Gloria enjoyed being a lay teacher for the Methodist Church. She traveled and spoke with numerous congregations throughout southern IL. In her most recent years, Gloria was active in the senior adult group at East 91st Street Christian Church in Indianapolis. Gloria was an excellent seamstress. She enjoyed making clothes, dolls and doll clothes for family and numerous friends. Gloria took great pride in being a student at “a one room school house”, Ritter School in Richland Co., IL, and graduating at 17 Flora High School. She loved participating in her class of ’50 reunions. Gloria started her career as a switchboard operator for the telephone company. Most of her career was spent with JC Penney Co. where she retired in 1995 as a store manager. She found an after retirement career with CVS in Center Line, MI, and Indianapolis, IN. Gloria gave most of her time and attention to her daughter, Twilla Brohman; and granddaughters, Rachel, Grace and Hannah Brohman, of Fishers, IN. Gloria is also survived by her youngest brother, Don (Sue) Dean of KS; and her best friend, Christy Robertson of Indianapolis. Gloria has a large family of nieces, nephews, greats and grands of her heart, continuing her legacy. She is preceded in death by her sisters, Carolyn Perkins and Phyllis Gross; and brother and sister-in-law, Robert and Kathleen Dean, Jr. A Memorial and Celebration of Gloria’s life will be held at a later date. In memory of Gloria, a donation may be made to Alzheimer's Awareness. Final care and arrangements are entrusted to Shirley Brothers Mortuaries, Indianapolis.

The family of Gloria E. Dean created this Life Tributes page to make it easy to share your memories.

Send flowers to the Dean family.