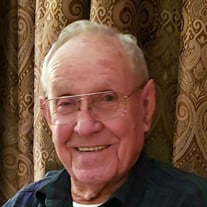 93, of Indianapolis passed away August 28, 2021. He was born February 17, 1928 in Lawrence County, Indiana to the late Leo and Grace Hackler Smithers. Before serving in the U.S. Army during World War II, he attended Needmore High School. Glen... View Obituary & Service Information

The family of Glen D. Smithers created this Life Tributes page to make it easy to share your memories.

Send flowers to the Smithers family.