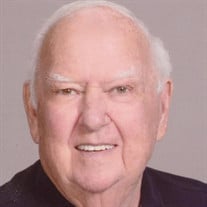 Gerald ‘Jerry’ Herbert Wilzbacher, D.D.S., 84, passed away February 3, 2021. He was born September 17, 1936 in Haubstadt, IN, to the late Florian and Leoma Wilzbacher. Gerald was a 1954 graduate of Haubstadt High School. He received his Bachelor’s Degree from the University of Evansville. In 1961, Gerald received his Doctor of Dental Surgery (DDS) degree from the IU School of Dentistry. He spent 2 years serving his country in the U.S. Army Corps as Chief of the Preventative Dentistry Clinic at Fort Belvoir, VA. In 1963, he began his private dental practice on the Eastside of Indianapolis at 16th and Downey Streets, which he operated for over 35 years. Gerald was a member of Little Flower Catholic Church, the American Dental Association and the Sertoma Club. He had a passion for dentistry, gardening playing Euchre, horseracing and traveling. The vegetables he grew won numerous blue ribbons at the Indiana State Fair, which gave him much pride and joy. He loved attending high school sports games around the state of Indiana, especially football and basketball. Visitation will be Monday, February 8, 2021 from 1:00 p.m. until the time of service at 2:00 p.m. at Shirley Brothers Washington Memorial Chapel, 9606 E. Washington St. For those unable to attend a live streaming of the service can be viewed by clicking on this link: https://client.tribucast.com/tcid/89124552 Gerald is survived by his loving wife, Janet Wilzbacher; daughters, Teri Lane (Phil), Susie Wuestefeld (Don) and Debby Wilzbacher; grandchildren, Connor Lane, Davis Lane, Audrey Lane, A.J. Popovic, Lainey Nichols (Aaron) and Lizzie Popovic; and siblings, Arliene Steckler (Joseph), Irma Rexing (Norman), Robert Wilzbacher and Rita Morris. He was preceded in death by his first wife and the mother of his daughters, Barbara Sexson Wilzbacher; four brothers, John, Joe, Eugene and Austin Wilzbacher. In lieu of flowers, memorial contributions may be made to the IU School of Dentistry Alumni Scholarship Fund c/o the IU Foundation or to Scecina Memorial High School.

The family of Gerald 'Jerry' Herbert Wilzbacher, D.D.S. created this Life Tributes page to make it easy to share your memories.