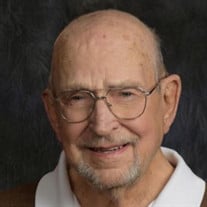 Franklin Lewis Speckman, 88, of Indianapolis passed away peacefully on September 16, 2021. He was born to Henry Lee and Anna Lewis Speckman on July 26, 1933. Frank graduated from Broad Ripple High School in 1951 where he earned letters in football and basketball before attending and playing football at Butler University. He spent his business career serving as Executive District Manager for Herald Life Insurance Company before retiring in 1985. Frank married Darlene Elizabeth Pritchard on August 7, 1954. The couple was happily wedded for fifty years before Darlene passed away at the age of 68 on March 15, 2005. Frank is survived by his loving and devoted wife, Carolyn Woodall Speckman, whom he married on October 11, 2008. Frank was preceded in death by his brother, Dr. Glen Hoy Speckman and his eldest son, Bruce Hoy (Darlene). He is survived by sons Wayne Lewis (Stephanie), and Dale Lee (Rochelle), stepson, Dan Hopkins (Brandy), and stepdaughter, Susan Elser (Brian). Frank was Peepa to grandchildren Jennifer Goad, Terry Guess, Amber Platt, Brandon Speckman (Katie), David Speckman (Beth), Brittany Speckman, Luke Speckman, Hannah Speckman, David Elser, and Ben Elser. He was also Peepa to great grandchildren Nicholas Goad, Ryan Goad, Benjamin Speckman, Elizabeth Speckman, Katherine Speckman, Elliot Speckman, and Micah Speckman. Frank is also survived by nephews David Speckman (Dori), Jay Speckman (Jill), and Jon Speckman (Deb), and niece, Betsy Speckman, as well as a host of great nieces and nephews, many lifelong friends, and a loving church family. Frank was a fifty-year member of Northside Baptist Church where he served in many capacities including Deacon, Sunday school teacher, young married leader, softball coach, basketball coach and referee, and Upward Christian Basketball League volunteer. Perhaps his greatest joy was serving as the church’s cook and kitchen coordinator for over thirty years. Frank also found great pleasure in serving as a bible study teacher at the Juvenile Detention Center in Indianapolis and volunteering at the Fort Benjamin Harrison YMCA. He also volunteered at the Salvation Army in Saint Petersburg, Florida where he loved spending winters with his wife Carolyn. Frank was always ready with a joke, or two or three, and was eager to share his love of Christ with all. Although he will be greatly missed, his family finds comfort in the knowledge that he is now in his Eternal Home where he has spent his life preparing to be. A celebration of Frank’s life will be held at Northside Baptist Church, 3021 East 71st Street, Indianapolis on Friday, October 1, 2021 at 3:00 pm. with calling from 1:00 p.m. until time of service. In lieu of flowers, memorial contributions may be made to the Meema Scholarship Fund at Northside Baptist Church, 3021 E. 71st Street, Indianapolis, IN 46220.

Franklin Lewis Speckman, 88, of Indianapolis passed away peacefully on September 16, 2021. He was born to Henry Lee and Anna Lewis Speckman on July 26, 1933. Frank graduated from Broad Ripple High School in 1951 where he earned letters in football... View Obituary & Service Information

The family of Franklin Lewis Speckman created this Life Tributes page to make it easy to share your memories.

Send flowers to the Speckman family.