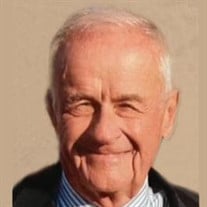 Dr. Francis E. McAree, Jr. Dr. Francis E. McAree, Jr., of Fishers, Indiana, died Wednesday, August 18, 2021. He will be interred at Oaklawn Memorial Gardens during a private family service for family. Fran was born July 20, 1930 in Indianapolis, the only child of Francis E. McAree, Sr. and Bernadine Towles McAree Shumaker. He graduated from Howe High School in 1948 and graduated from Indiana University (IU) and its Medical School in 1955. While at IU, Fran was a member of Phi Kappa Psi fraternity, a choral quartet, and a letter-winning member of its legendary swim team. He also enjoyed musical performances by many stars at the time, including his idol, Louis Armstrong. Following medical school, Fran performed his internship at Philadelphia General Hospital, where he met a beautiful nursing student from Philly, Judy Mischler. Upon completion of his internship, Fran entered the U.S. Air Force and was assigned to serve as a medical officer at Fuchu Air Base, in Fuchu, Japan. Fran and Judy married and began their life adventure together in Japan, welcoming their son, Kevin, there and offering Fran the opportunity to travel throughout Indonesia, the Philippines, and India. Fran served in the U.S. Air Force on active duty from 1956-1958, attaining the rank of Captain, and on reserve duty until 1972. Back in Indianapolis in late 1958, Fran began his residency in Obstetrics and Gynecology at Methodist Hospital. He then opened a private practice in association with Community Hospital East, where he practiced for nearly 50 years. Fran was passionate about the field of medicine, reading journals on a daily basis into his 90th year. He was equally passionate about his patients, delivering well over 10,000 babies and caring with a rare expertise and devotion to his thousands of patients, including many multi-generational family members. A Volunteer Clinical Associate Professor at IU Medical School, Fran received the Distinguished Physician Award from Community Hospital in recognition of his contributions to the institution and his community of patients. Prior to and following retirement in the late 2000s, Fran continued to serve as a volunteer physician at the Volunteers in Medicine clinic in Hilton Head, South Carolina—the first free and charitable clinic of its kind. He and Judy also served as medical volunteers to low-resource communities through multiple mission trips to Belize and Ecuador. Fran’s devotion to his medical career was exceeded only by his enduring and unconditional love for and devotion to his family, including his beloved wife, Judy, his children, Kevin, Julie and Laura; his eight grandchildren; his mother, Bernadine; and his extended family members. The family enjoyed an exciting life together with many international trips and time spent at their homes in Stone Harbor, NJ and later at Oldfield in Okatie, SC, with the Mischler clan. Bernadine, Judy and Laura preceded him in death, but Fran continued to honor them throughout his life. A tribute to Fran would not be complete without mention of the central role that the sport of swimming played in his life. From his early days on the swim team and later playing biddyball at the Indianapolis Athletic Club, to his years with Coach Robert Royer at IU, to a successful master’s career—including four gold medals at the Master’s National swim meet at age 80 – Fran’s swim teams provided him with great friends and good health until he swam last mile workout on his 90th birthday. Memorials may be made in honor of our Fran to The Aslan Project www.aslanproject.org and/or Volunteers in Medicine https://vimclinic.org/donations/make-a-donation/. Final care and arrangements are entrusted to Shirley Brothers Fishers-Castleton Chapel.

The family of Dr. Francis E. McAree, Jr. created this Life Tributes page to make it easy to share your memories.

Customized sympathy cards. Mailed for you.